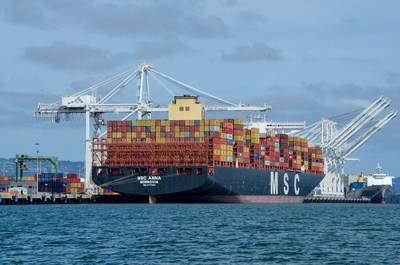 The Port of Oakland reported "better than expected" cargo volumes in April, but port officials say they are expecting volumes to decline in the months ahead as ships cancel visits due to reduced demand brought on by the coronavirus pandemic.

The port said its total cargo volume – imports, exports and empty container shipments – declined 6.5% last month. It attributed the decline to a 29% drop in shipments of empty containers back to origin destinations.

“Our April cargo performance was better than expected, but it was most likely a blip resulting from the release of pent-up demand when factories re-opened in China after being quarantined,” the Port said in a statement. “We’re faring better than some other ports, but our forecast in the coming months is overall volume throughput decline of 5-to-10%.”

The port said shipping lines have canceled 11% of scheduled vessel calls in Oakland for May and June. The global economic downturn resulting from the pandemic has led ocean carriers worldwide to scrub voyages due to dwindling demand by shippers for vessel space.

The port said exports leaving Oakland for overseas markets continue to be a bright spot midst the pandemic. Export volume has increased year-over-year in three of the past four months, according to port data. The port said growth in exports to Southeast Asian markets has offset shrinking trade with China. It said Asian demand is strongest for U.S. farm goods.