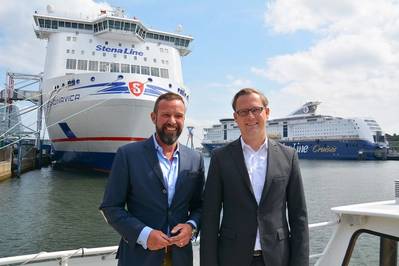 The Port of Kiel invests in cargo handling, environmental technology and the traffic shift from road to rail. Dr. Thilo Rohlfs, state secretary of the ministry for economy, transport, labor, technology and tourism for the country of Schleswig-Holstein, made use of a visit to the port of Kiel to inform himself about the current port investment projects that take place in the capital city of Kiel.

“The port of Kiel has grown significantly over the past years. With the support of the county of Schleswig-Holstein, the port has managed to realize some very important projects such as the expansion of the Ostuferhafen”, says state secretary Rohlfs. Today, the port of Kiel handles over 7 million tons of cargo per year and over 2 million passengers pass through the port annually. Thilo Rohlfs: “My impression that the Port of Kiel is very well-positioned and that it is capable of successfully holding its ground has been confirmed. The country of Schleswig-Holstein will continue to actively support this successful trajectory of the port of Kiel in future.” As part of a tour of the harbor, PORT OF KIEL’s managing director Dr. Dirk Claus informed the state secretary of the port’s current investment plans. Alongside the project to expand the pre-storage area for trucks at Kiel’s Ostuferhafen these plans include the creation of a third switching track at Kiel’s Schwedenkai terminal as well as the creation of an onshore power supply facility at Kiel’s Norwegenkai terminal.

Expansion of the pre-storage area for trucks at Kiel’s Ostuferhafen
The Port of Kiel plans to completely re-design the entrance area to Kiel’s Ostuferhafen terminal. This re-design includes the demolition of shed 34 to 36 that form part of the larger estate that was previously used by the former Getreide AG. This partial demolition will result in the port pre-storage area being extended which will generate additional pre-storage space for truck and cars. The building works to realize this project will commence this summer and are expected to be completed by spring 2019. The new entrance situation to Kiel’s Ostuferhafen will combine previously separated pre-storage areas, minimize travel paths on the area of Kiel’s Ostuferhafen and generate additional pre-storage space for trucks overall. Dirk Claus: “This project benefits both the DFDS shipping company as well as the SCA and Iggesund Paperboard forest product business.” The overall investment of the entire project is set to be 7 million Euro which includes the costs for demolition of the sheds, soil remediation, underground and road construction works as well as the implementation of a new lighting system for the entirety of the 2.8 hectare area that is being generated. The new pre-storage area will be access in line with the existing transportation concept of using the connecting road to the city ring road.

Third switching track will improve the traffic shift from road to rail
To improve the efficiency of the ship/rail intermodal transport performance, Port of Kiel is planning to pursue two rail expansion projects. Firstly, as part of the federal government’s emergency program seaport-hinterland transport II, the marshalling yard Kiel-Meimersdorf is being upgraded to enable cargo trains of a length of 740 meters to enter the marshalling yard. Secondly, the entrance area of Kiel’s Schwedenkai will be equipped with a third switching track. The building works for this 1.25 million project are expected to be completed at the end of next year. Dirk Claus: “As per Port of Keil’s Blue Port concept we aim to shift as many of our hinterland-transports as possible from road to rail. To accommodate for this we need to expand the rail infrastructure.” Last year for the first time to date more than 30.000 trailers and containers were transported by rail. “Color Line’s new freight line will offer the possibility to implement additional direct hinterland-train connections from Kiel. This will positively benefit all of port of Kiel’s terminals as well as all scheduled ferry services”, says the managing director of the PORT OF KIEL.

What Special Relationship? Canada Grimaces Amid US Trade Blows