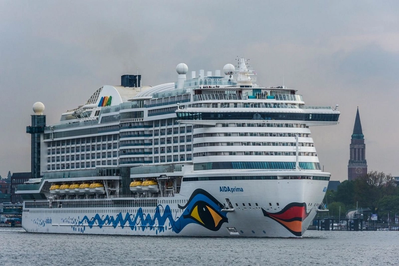 The visit of the cruise ship AIDAprima on Saturday, October 12, marked the end of the oceangoing cruise season in Kiel, and what a season it was with ship visits and passenger numbers up over 2018.

Record numbers were recorded even while the cruise terminal underwent expansion, with the new construction of a asecond terminal building as well as the festivities marking the Anniversary of German Unification required a temporary adaption of handling processes at the northern Ostseekai berth. “Very big ships with more than 4,000 passengers can be handled smoothly at the Ostuferhafen Terminal," said Dr. Claus.

Highlights from the 2019 Kiel cruise season include:

-- The most frequent guests were the vessels of the AIDA shipping company with an inaugural call by the AIDAprima.

Construction work has recently started and next year there will not only be the second terminal building but also, according to Dr. Claus,"the most powerful on-shore power supply plant in a German port to be commissioned at the Ostseekai Terminal, helping to further improve the port's carbon footprint.