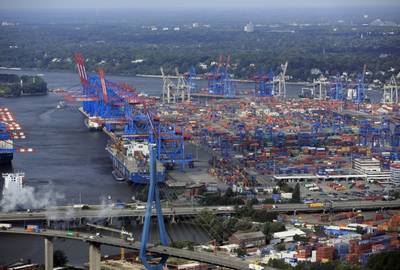 Photo courtesy of Port of Hamburg

The Port of Hamburg continues record performance handling a total of 72.6 million tons (+ 6.6 percent) in the first six months of 2014.

Hamburg’s universal port with 50.7 million tons of predominantly container handling achieves a result of 4.8 million TEU (20-ft standard containers), an increase of 6.8 percent. The largest seaports on the north European continent show an average growth in total handling of 1.8 percent and in container handling of 2.6 percent. The Port of Hamburg can look back on above average growth in container traffic, building up its market share from 25.7 to 26.7 percent.

At 51.6 million tons in the first half year general cargo handling showed a gain of 8.8 percent. “We can see extraordinarily strong growth in loaded container handling: 4.2 million full boxes went over the quay walls in Hamburg. That is 8.2 percent more than in the previous year and more than ever before in the port’s history in a first half-year,” explained Axel Mattern, member of the Executive Board of Port of Hamburg Marketing. At 588,000 TEU, handling empty boxes showed a slight decline of 2.1 percent. Strong exports with a total of 2.3 million TEU (+ 6.3 percent) in container handling, and comparably strong imports at 2.5 million TEU (+ 7.4 percent) are largely responsible for the generally above-average result in container handling.

Throughput in conventional general cargo also showed positive development with a plus at 930,000 tons (+ 0.8 percent) in the first half year, including 302,000 tons (+ 1.7 percent) in project and heavy lift cargo handling at the special terminals. This was possible thanks to strong growth in imports from 33.3 percent up to 66,000 tons. The bulk cargo sector with 21 million tons shows growth of 1.6 percent. This result was especially positively influenced by growing exports of grain, petroleum, biodiesel and chemical products. On the import side there was a slight decline of 4.5 percent in throughput of suction, grabbable and liquid cargo.

New jobs thanks to increased handling volumes
“The growth in seafreight has created new jobs in the Port of Hamburg.

In the meantime there are more workers employed in the handling terminals than in the boom year 2008. The port economy is specifically seeking and employing more workers,” said Ingo Egloff, member of the Executive Board of Port of Hamburg Marketing. HHLA has just created 50 new jobs at Container Terminal Burchardkai at the end of July, and announced they would hire new employees at Container Terminal Altenwerder. The Personnel service provider for the port GHB (Gesamthafenbetriebsgesellschaft) has created 60 new jobs this year, in order to have enough qualified personnel for continued growth in general and bulk cargo terminals. “The Hamburg Port Authority is prepared for further growth and is increasing training places for the next generation, qualification programmes for career changers and continuous in-service training for employees. The port with its many varied professional requirements offers numerous attractive opportunities for those starting a career,” explained Egloff.

Delayed ships and construction sites have not hindered growth
Against a backdrop of considerable ship delays all the large container ports in the North Range are presented with considerable challenges, having to cope with the consequences. The delays, on average 70 hours and more in container shipping, especially for the larger containerships with between 6,000 and 7,000 containers (TEU) handled in each ship’s call, can very quickly lead to traffic problems at the port terminals. In addition the numerous construction sites in the Port and in the Hamburg area influence traffic flows at times. “We are especially pleased that in spite of these difficult conditions the Port of Hamburg can be competitive in the North Range and so successful, even gaining extra cargo volumes,” says Mattern.

Securing the Port of Hamburg’s reliability and quality is of special importance to Frank Horch, Hamburg’s Senator for economics, transport and innovation “It is our joint task to bring the transport chain in and through the Port of Hamburg back to the high level of reliability that made the port a preferred logistics service provider. Our investments in infrastructure are an absolute must. Today, those who make a case for less building, are putting the future of our location at risk,” emphasised Horch.

Heinrich Ahlers, CEO of Buss Port Logistics underlined that accessibility to Hamburg‘s universal port for heavy lifts is vital for many port companies and their employees: “Project cargo safeguards jobs for port service providers and multi-purpose terminals, such as our Buss Hansa Terminal. Hamburg policymakers must work together with the federal government and states to further maintain infrastructure, to avoid migration and the loss in value creation that would cause.”

From the point of view of Port of Hamburg Marketing it is clear that up to now, general good coordination of construction sites in the port and its main traffic axes have been greatly facilitating cargo traffic flows and contributed to the record results achieved in seagoing throughput in the Port of Hamburg. “The port cargo handling business as well as the transport companies have impressively demonstrated that even with temporarily critical situations it is possible to move large volumes of cargo into the hinterland. We can now already say that the fourth tube of the Elbe Tunnel, which is again in use has visibly relieved the traffic situation. The maintenance work necessary on the Köhlbrand bridge in the port is also making good progress and will be completed in October,” emphasized Axel Mattern. Jens Meier, Managing Director of Hamburg Port Authority, added: “Our excellent figures are at the same time a challenge for the tomorrow. Only together can we guarantee the traffic flows for the future and so sustainably remain on course”.

The Port of Hamburg Marketing Executive Board also states clearly that they will keep domestic and foreign port customers informed through the port representatives on particular challenges e.g. the still outstanding river channel adjustments of the lower and outer Elbe and the impact of construction work and temporary handling bottlenecks at the terminals. “Our Port customers are showing considerable understanding for this particular situation. It is clear to them that the traffic and handling situation in other large European container ports is also not free of traffic jams and other problems. We rely on speedy implementation and completion of Hamburg’s most important infrastructure projects and on the strong performance of the Port and transport industry in Hamburg and the region. Hamburg is Germany’s largest port and logistics location and takes on an exceptional function as a hub for global cargo flows for our economy and the exports of our neighbouring countries,” added Egloff.

Number of especially large containerships increasing further in Hamburg
The first six months were also marked by a volume increase in seaborne cargo of an unforeseeable amount, brought about by the continued growth in size of containerships. In the first half year of 2014 Hamburg received 244 ultra large containerships with slot capacities of 10,000 TEU and more. The number of ships in this large size class calling increased in a similar period of time by 27.1 percent and clearly shows that the river channel adjustment in the lower and outer Elbe must be urgently realized for the Port and shipping industry.

Record level of 145 million tons can be reached by the end of the year
“In 2014 we can reach a plus of four percent in sea cargo handling and in container handling a five percent increase, if everything goes according to plan,” forecasts Axel Mattern. This is on condition of further growth in container traffic with China and no increasing limitations on foreign trade with Russia because of sanctions. The result for the Port of Hamburg for the year 2014 a total turnover of approximately 145 million tons and a container throughput of about 9.7 million TEU would be possible. This would top the previous record achieved in 2008 of 140 million tons of sea cargo.