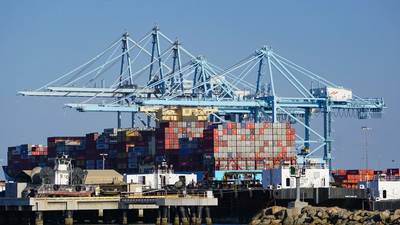 The executive overseeing the busiest U.S. gateway for ocean trade with China on Thursday said the "weaponization of tariffs" to advance U.S. policy interests may now be the "new normal."

The partial pact will cut some U.S. tariffs on Chinese goods in exchange for Chinese pledges to purchase more American farm, energy and manufactured goods.

"Even with a Phase 1 trade deal now inked with China, the use of trade taxes to advance policy may now be the new normal," Seroka said at the State of the Port conference in San Pedro, California.

The Trump administration's "weaponization of tariffs" led to a "debilitating trade war" that roiled global supply chains, rerouted cargo and had a measurable impact at the nation's No. 1 seaport, Seroka said.

That came despite a 17.3% decline in total container volume in December, when imports tumbled 20.3% and exports slid 12%.

West Coast ports, which send more than two-thirds of their imports to the eastern half of the country, are getting pinched as U.S. retailers and other buyers of manufactured goods shift sourcing from China to Southeast Asia and route products to lower-cost U.S. ports.

That has "redirected some of our cargo through the Suez Canal to East Coast ports, costing us further market share and jobs," Seroka said.

In the first 10 months of 2019, U.S. imports from Asia to West Coast ports declined 3.2%. Those imports increased 5% and 17.4% to East Coast and Gulf Coast ports, respectively, during the same period, according to Journal of Commerce.