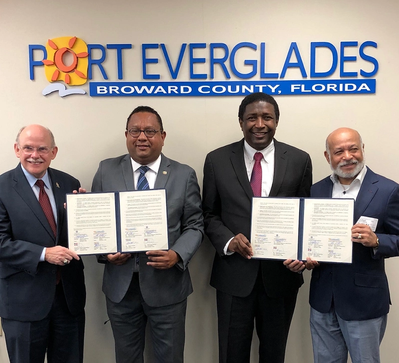 Broward County's Port Everglades Department and the Dominican Republic Port Authority have signed a Memorandum of Understanding (MOU) as part of a joint Sister Seaports agreement.

The MOU will  promote bilateral trade. The two parties want to establish an alliance of cooperation aimed at facilitating international trade and generating new business by promoting the sea trade routes between the two countries. The MOU outlines joint initiatives, including marketing activities and market studies, training, and sharing of information on technology, modernization and improvements.

“International trade promotion is a priority for our Port and Broward County for generating economic prosperity in our region,“ said Broward County Mayor Dale V.C. Holness, who signed the MOU document along with the Acting Chief Executive and Port Director Glenn Wiltshire on behalf of Port Everglades. “Our port’s trade with the Dominican Republic alone in 2018 reached a record $2.69 billion.”

Under the agreement, the two parties may also embark on initiatives related to the cruise industry.