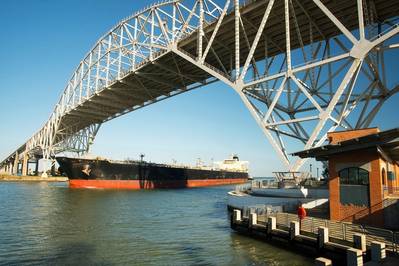 The Port of Corpus Christi reports this month it achieved its best quarter and best first half in its 100-year history.

In Q2 2022, the port moved a record 46.4 million tons, eclipsing the prior record quarter (Q4 2021) by 4.8%. The Port of Corpus Christi also closed out June by celebrating not only its best first half historically, but its best half ever. During the first six months of 2022, the Port of Corpus Christi’s customers moved 90.1 million tons of commodities through its waterway, up 11.9% from 1H 2021. These records primarily were driven by growth in crude oil and refined products, liquefied natural gas (LNG) and dry bulk cargo.

Crude oil shipments for 1H 2022 totaled 52.4 million tons, for a gain of more than 12% over the prior record set in the same period last year. Refined products amounted to 15.8 million tons, an increase of 26.6% from 1H 2021. Dry bulk cargo came in at 3.9 million tons – 21.5% above the first half of 2021, and LNG shipments increased by 11% to 8.1 million tons. These record-breaking figures come shortly after the Port announced its best first four months ever, setting new tonnage and revenue records again, after a banner year in 2021.

“These numbers are a testament to the role the Port of Corpus Christi and its industry partners play in the global marketplace, providing certainty in uncertain times,” said Charles W. Zahn Jr., Port of Corpus Christi Commission Chairman. “With additional initiatives in hydrogen production and Carbon Capture Utilization and Sequestration also in the development stages, the future continues to look bright for the South Texas Coastal Bend and beyond.”