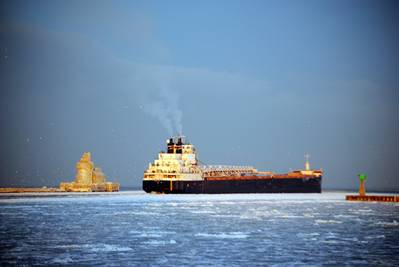 The Port of Cleveland informs it has been awarded by the U.S. Saint Lawrence Seaway Development Corporation (SLSDC) for its international cargo growth.

The Robert J. Lewis 2014 Pacesetter award, presented to the port by the SLSDC this morning at its monthly board meeting, recognizes growth in international cargo, generated by the port’s Cleveland Europe Express (CEE) liner service and its traditional line of non-containerized steel cargo. Operated by Dutch ship owner Spliethoff Group, the CEE provides the Great Lakes only scheduled maritime access to European markets.
The growth produced by the CEE is “quite exceptional,” according to SLSDC Administrator Betty Sutton, who was on hand to present the award. Sutton noted a 35 percent increase in international cargo and 30 additional international ships traveling through the Seaway to or from Cleveland in 2014. The creation of the CEE was seen as a “breakthrough in St. Lawrence shipping,” said Sutton, who reported seeing increased awareness of and excitement for using the service in her travels on behalf of the SLSDC.
“The Port of Cleveland is honored to receive the Pacesetter Award,” said Will Friedman, Port President and CEO. “It’s more proof that our strategic investment in the liner service and our docks are paying off, and helping Northeast Ohio businesses connect to and compete in the global economy.”
An update on maritime delivered to the board affirmed that the 2014 growth recognized by the Pacesetter Award has continued into 2015. Dave Gutheil, Port VP of Maritime & Logistics, stated that the CEE continues to increase volume significantly. The rise in shipping container traffic has been particularly dramatic.
“We are up nearly 475 percent just in the volume of shipping containers compared with last year,” Gutheil said. “The direct international connection the CEE provides is critical for our region to compete in the global economy.” Gross revenue generated by the CEE also has more than tripled as compared with this time in 2014.
In support of maritime, the board approved a series of four resolutions authorizing investments in port infrastructure, including design and construction of a new warehouse with up to 45,000 of storage space; the purchase of new cranes to handle the increase in shipping containers via the CEE; the purchase of a reach stacker to increase efficiency on dock and upgrades to the port’s perimeter security fence.
These infrastructure improvements are partially or fully funded through a combination of grants and forgivable loans. Those include a $4.9 million Congestion Mitigation and Air Quality (CMAQ) grant awarded through NOACA and the Ohio Department of Transportation (ODOT); a forgivable $3 million State of Ohio Logistics and Distribution Stimulus Loan (LDS); and a $74,250 Department of Homeland Security Grant.
• Betty Sutton • Great Lakes • Northeast Ohio