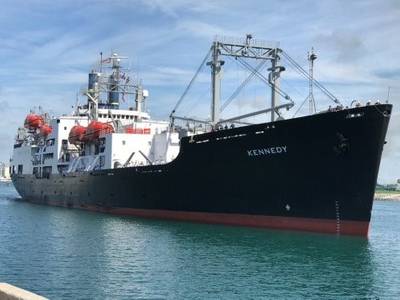 Massachusetts Maritime Academy’s 540-foot training vessel, TS Kennedy, arrived at Port Canaveral Thursday. The ship has 275 Texas A&M Maritime Academy cadets plus their faculty and crew on board for a required sea term.

In welcoming the Kennedy’s Capt. Michael Campbell, an alumnus of the Massachusetts Maritime Academy, Captain Murray presented the captain and crew with a traditional plaque to commemorate the vessel’s inaugural visit to the Port.

“The hands-on training and learning opportunities our nation’s maritime academies provide help to prepare these cadets for careers in the maritime industry – whether it’s on board a cruise or cargo ship or at a port like ours,” stated Port CEO Captain John Murray. “We are proud to welcome the Kennedy to Port Canaveral and wish the students every success in their future careers.”

Once a commercially-operated breakbulk vessel named the SS Velma Lykes, the ship has been owned and operated by the U.S. Maritime Administration (MARAD) and used as a training vessel by the Massachusetts Maritime Academy since 2003. The vessel was renamed the TS Kennedy after an extensive $10 million rehabilitation conversion in 2009. In 2012, she was activated to support FEMA in response to Hurricane Sandy. Last year, the vessel was activated by MARAD and deployed to Texas following Hurricanes Maria and Irma to assist with relief efforts and then, more recently to Puerto Rico.

Massachusetts Maritime Academy and Texas A&M Maritime Academy are two of six maritime academies in the United States offering specialized maritime training and education programs. Academy cadets pursuing certain maritime careers must sail a specified number of hours to earn a certification. The Texas A&M Maritime Sea Aggies’ current training ship, the TS General Rudder, which called on Port Canaveral last summer, has its capacity limited to about 50 students. The TS Kennedy has enough room to house and feed up to 710 people for about 30 days. The ship is also equipped with a hospital and can provide its own clean drinking water. The Texas Maritime cadets will be sailing onboard Kennedy until July by agreement between the two maritime academies.

Port Canaveral historically is a popular port of call and has been welcoming students from various maritime programs for many years. Last year, in addition to the TS General Rudder, the Port hosted the U.S. Coast Guard Training Ship, Eagle.

The TS Kennedy will be docked at Port Canaveral until Sunday.