Port of Baltimore Gets Federal Funding to Improve Rail Infrastructure 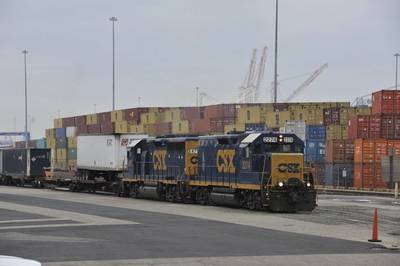 The Helen Delich Bentley Port of Baltimore will receive $15.6 million from the Federal Railroad Administration (FRA) Consolidated Rail and Infrastructure Safety Improvements (CRISI) program for its Rail Capacity Modernization Project. The Project will reconstruct and update the Seagirt Marine Terminal’s intermodal rail yard infrastructure and support increased demand for double stacked trains of containerized cargo to markets across the country.

“This funding will support the continued growth of Maryland’s Port of Baltimore,” said Governor Larry Hogan. “This project adds to the more than $200 million that I authorized for the Howard Street Tunnel expansion project which will allow for double-stack capabilities to and from the Port, increased Port business, and thousands of jobs.”

“Maryland’s Port of Baltimore is one of the busiest ports in the nation and having good rail operations is extremely important,” said Maryland Transportation Secretary James F. Ports, Jr. “This grant will help us to continue positioning the Port to remain as one of Maryland’s leading economic engines.”

“This is terrific news for the Port of Baltimore,” said Maryland Port Administration- Port of Baltimore Executive Director William P. Doyle. “Improving intermodal rail operations is one of our top priorities and the infrastructure improvements made possible through this grant will seamlessly complement our Howard Street Tunnel expansion project which is now underway. Our rail service from the Port of Baltimore to the Midwest is already increasing as we pick up shippers diverting around congested gateways.”

In addition to providing more seamless and efficient rail operations, the CRISI Project will also add environmental benefits. Air quality around the Port will be improved by increasing rail usage and from the conversion of the existing diesel-fueled rail yard operation to electrified equipment. Additional rail usage will also help alleviate ongoing logistical bottlenecks on major interstate highways.

“This grant will take us one step closer to increasing capacity to meet current and future demands ahead of the Howard Street Tunnel Project,” said Bayard Hogans, Vice President of Ports America Chesapeake. “In addition, the project will result in improved environmental impact and safety at Seagirt—two fundamental priorities for Ports America Chesapeake.”

Supplementing the FRA CRISI Project is the CSX-Howard Street Tunnel expansion project which will allow for double-stacked container rail cars, clearing a longtime hurdle for the Port and giving the East Coast seamless double-stack capacity from Maine to Florida. The project involves clearance improvements in the 127-year-old tunnel and at 21 other locations between Baltimore and Philadelphia. With the tunnel expansion project, Baltimore will be able to send double stacked containers by rail into the Ohio Valley and onto Chicago.

Groundbreaking on the project occurred in November 2021 and the project is scheduled to be completed in 2025. The Howard Street Tunnel project benefits from public-private investment from the federal government, Maryland, CSX, and others, and is expected to increase the Port’s business by about 160,000 containers annually. It will also generate about 6,550 construction jobs and an additional 7,300 jobs from the increased business.

“This is great news for the men and women of the International Longshoremen’s Association,” said Scott Cowan, president of ILA Local 333. “Improving our rail capabilities means more business for the Port of Baltimore and that’s good news for us.”

The Port of Baltimore also recently put into operation four additional supersized, Neo-Panamax container cranes. The cranes are part of a $166 million investment made by PAC at the Seagirt Marine Terminal. The new cranes are serving the additional deep-water berth which was completed last year. Having an additional deep berth allows the Port to serve supersized cargo ships simultaneously.

Last month, the Port of Baltimore welcomed its newest container line service, the ZIM Shipping Lines E-Commerce Baltimore Express (ZXB), a service from China and Southeast Asia to the U.S. East Coast. The addition of ZIM follows another container service that recently began at the Port of Baltimore: a new Indian Subcontinent and Mediterranean service through Mediterranean Shipping Company.

There is a need for utilization of more gateways such as Baltimore to land cargo in the United States. Import/export demand for containerized cargo has substantially increased over the past year. With that demand, port congestion is at an all-time high. Baltimore is a prime gateway for goods heading to the ecommerce market and for cargo sent to the Midwest via rail. Maryland’s Port has handled nearly 50 “ad hoc” ship calls during the recovery stages of the pandemic, which includes extra loaders from ZIM – vessels diverted to Baltimore that were not on a regularly scheduled service call.

Maryland’s Port of Baltimore generates about 15,300 direct jobs, with nearly 140,000 jobs overall linked to Port activities. The Port ranks first among the nation’s ports for volume of autos and light trucks, Roll on/Roll off (heavy farm and construction machinery), and imported gypsum. It ranks 11th among major U.S. ports for foreign cargo handled and ninth for total foreign cargo value.