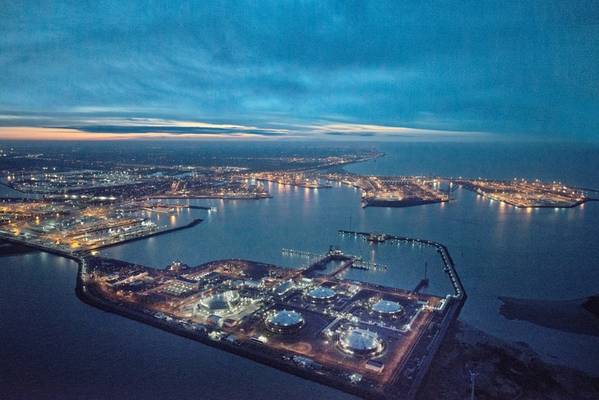 The Port of Antwerp-Bruges reported "stable" results for 2022 amid a challenging year fraught with geopolitical tensions, energy crisis and ongoing supply chain disruptions, in addition to various commodity flow shifts that put considerable sustained pressure on the container segment. Overall, throughput was down 0.7% year-on-year to 286.9 million tons of cargo.

The challenges were most palpable in container traffic, the port said. Global disruptions within container shipping, and the resulting congestion with peak call sizes and delays, put pressure on volumes throughout the year. In addition, the conflict in Ukraine caused a decrease in Russia-related traffic by 59%. And while operational challenges at container terminals and congestion have been slowly easing since the third quarter, high energy prices and economic uncertainty have caused a slowdown in demand for container traffic. As a result, container throughput fell 8.6% in tons and 5.2% in TEUs in 2022, compared with a strong 2021, back to pre-pandemic levels.

The war in Ukraine, the sanctions against Russia and the energy crisis greatly changed the energy landscape and flows in Europe, which translated into strong growth in bulk cargo. Dry bulk throughput increased by 13.8% in 2022. Coal throughput, in particular, experienced a sharp increase (+210%) due to the substantial rise in demand for coal powered generation. Fertilizers, however, declined by 18.3% due in part to sanctions on Russia and significantly higher fertilizer prices.

The liquid bulk segment grew 10%, mainly due to a 61.3% increase in demand for liquefied natural gas (LNG) as an alternative to natural gas via pipelines from Russia. There was also growth for liquefied petroleum gas (LPG) (+30%), gasoline (+7%), diesel/fuel oil (+9.9%) and naphtha (+7.5%). Chemicals throughput, which had its best year ever in 2021, began to decline in mid-2022 due to increased energy prices that put pressure on the European chemicals sector; volumes ended up with a slight decrease of 1% compared to 2021.

After record figures in 2021, conventional breakbulk (+1.1%) held up well in the first half of the year due to growth in the throughput of steel, the main commodity group within this segment. Starting in the third quarter, steel volumes declined as a result of the slowing economy.

Total roll-on/roll-off traffic saw an increase of 6.5%. More than 3.26 million new cars were handled in 2022, an annualized growth of 10.5%. Throughput of 'high & heavy' rolling stock increased by 9.6%, while throughput of used cars and trucks decreased by 13.2% and 17% respectively. Unaccompanied cargo (excluding containers) grew 10.0%, a significant portion of which was related to the United Kingdom (+4.9%) and Ireland (+35%).