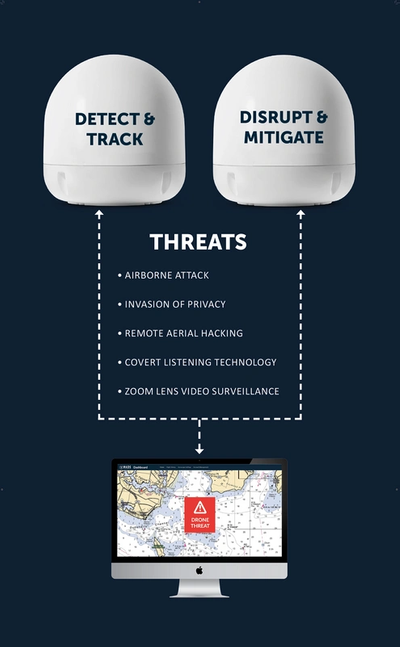 M.A.D.S (Marine Anti Drone Systems), a drone detection system, announced a four-week trial of its system by Port of Amsterdam.

The focus of the trial for the Port is to build understanding of how, where and why drones are flying over the Port of Amsterdam.

The Port has identified the potential of drones for numerous use applications across its, and its customers’ operations. This trial will monitor their use. Many Port customers are preparing to use drones for infrastructure inspection and measurement of environmental parameters. The data collected from this important pilot will have far reaching influence on the future use of UAVs (unmanned aerial vehicles) across the 650ha Port area.

A recent report by IDC (international Data Corporation) stated that it expected worldwide investment in drones to be USD12.3 billion in 2019, with drone purchase growing nearly twice as fast as the investment in robotics over the same period.

Like any tool, drones are being used for good as well as malevolent purposes. There is a potential threat to transport such as container ships and major infrastructure, such as ports, around the world. Whether this is through;
•privacy invasion
•Terrorism threats of explosives or gas attack
•flyby hacking to take control of autonomous or semi-autonomous systems
•stealing valuable data off unprotected networks or breaking into insecure networks

The M.A.D.S system will support the Port by monitoring legal and illegal flying across its land. The system solves this problem by detecting and identifying drones within a 5km range, providing GPS positioning of both drone and pilot together with the drone’s speed and heading. Configurable and escalating stage alarms in real time allow the drones intentions to be assessed in good time to decide on appropriate defense actions.