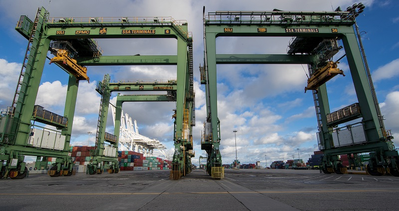 The Port of Long Beach has been awarded $2.4 million from the U.S. Environmental Protection Agency to help Stevedoring Services of America (SSA), Foss Maritime and Curtin Maritime replace equipment with zero-emission or cleanest-available equipment.
The Diesel Emission Reduction Act money will enable SSA to retrofit three rubber-tired gantry cranes to all-electric operations, entirely reducing related emissions and diesel fuel consumption. The funds will also assist in retrofitting four tugboats operated by Foss and Curtin with the newest and cleanest engines available.
“Every step we take to cut air pollution is one toward our ultimate goal of being the world’s first zero-emission seaport,” said Harbor Commission President Lou Anne Bynum. “We thank the EPA for providing funds to facilitate these projects and improve the health of our community.”
Over the next two decades, the projects are expected to reduce carbon dioxide by 15,606 tons, nitrogen oxide by 1,649 tons, carbon monoxide by 267 tons, diesel particulate matter by 61 tons and hydrocarbons by 40 tons. The equipment is scheduled to be in place by the end of 2019.
The Diesel Emission Reduction Act was enacted in 2005 and provides grants to state, local and tribal governments for programs to reduce emissions from diesel engines, according to the EPA. It is estimated every $1 allocated by the Act’s grants results in about $13 worth of health and environmental benefits.
Since 2005, the Port has received $14.2 million in grants from the EPA to reduce emissions associated with operations. In total, the Port’s environmental initiatives and industry’s cooperative efforts have helped cut diesel emissions by 88 percent since 2005.
Earlier this month, the governing boards of the Port of Long Beach and the Port of Los Angeles unanimously approved an updated Clean Air Action Plan, a landmark document that has led to dramatic drops in pollution over the last decade. The update accelerates progress toward a zero-emission future while protecting and strengthening the ports’ competitive position in the global economy.
• America • Environmental Protection Agency • Foss Maritime