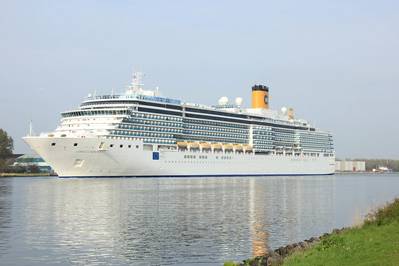 Passengers who have tickets to travel back to their home countries will be allowed to disembark from the coronavirus-hit Costa Luminosa cruise ship in Marseille, the port authority and the cruise operator said on Thursday.

A port official told Reuters that 639 passengers, including 187 French nationals, would be allowed to leave the ship in small groups, depending on the timing of their transport home.

There were more than 1,420 passengers on the liner, including 230 Americans, 168 Italians and 100 Canadians, according to the cruise operator, Italy’s Costa Cruises, a subsidiary of Carnival Corp.

The company said in a statement that following the positive outcome of on-board checks carried out by French health authorities, the Costa Luminosa had begun disembarking French passengers and other nationalities, chosen on the basis of transport logistics for returning home.

“Guests will be accompanied to their flights and transfers, organized by the company, through a sanitary cordon of isolation,” Costa Cruises said.

The ship is then scheduled to continue to Italy where the remaining guests will disembark.

The Marseille region prefecture said that it was still waiting for the results of tests on passengers that were showing symptoms of coronavirus infection. It added that one passenger had been hospitalized.

The Costa Luminosa had left Fort Lauderdale, Florida, on March 5 on a cruise destined for Venice, Italy, but days later it had to disembark two passengers in Puerto Rico who later tested positive for the coronavirus. It also unloaded four sick passengers on the Canary island of Tenerife.

France is in its third day of a virtual lockdown to fight the coronavirus pandemic, with 264 dead so far.

Cruise ships - with their tightly packed crowds of often elderly passengers - have repeatedly been hit by the coronavirus and have been banned from disembarking in several countries.

Top operators such as Royal Caribbean Cruises, Norwegian Cruise Line Holdings and Costa Luminosa parent company Carnival Corp have all suspended voyages for extended periods and their stocks are among the worst hit in the travel industry.

South Africa banned all passenger vessels from its ports on Wednesday, leaving tourists on a cruise ship docked in Cape Town in limbo following tests for possible coronavirus cases on board.