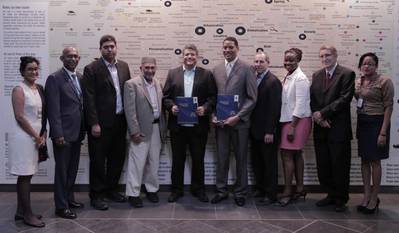 On May 25, 2016, The University of the West Indies Arthur Lok Jack Graduate School of Business (UWI-ALJGSB) together with the Trinidad and Tobago Shipbuilding & Repair Maritime Cluster (TTSR) signed a Memorandum of Understanding to undertake maritime project initiatives involving research, the sharing of knowledge and showcase technologies in the context of improving energy efficiency and reducing CO2 emissions in the maritime sector.
One such initiative involves an Expression of Interest to the International Maritime Organization (IMO) for the establishment of a regional Maritime Technical Cooperation Center (MTCC) for the benefit of the IMO’s 14 Member Caribbean States, of which Trinidad and Tobago is a signatory country. This forms part of an ambitious project to establish a global network of Maritime Technology Cooperation Centers (MTCCs) in developing countries, thanks to a €10 million funding contribution from the European Union. This project will be coordinated by IMO’s Marine Environment Division through a dedicated unit at IMO headquarters in London.
The UWI-ALJGSB, Mount Hope Campus is simultaneously completing a brand new building, which will be a major component in their proposal to host the regional MTCC in Trinidad and Tobago. The State-of-the-art office structure when completed in December 2016 is intended to realize cost-effective measures which enhance energy efficiency and will accommodate additional classrooms for their specialized Master’s Program in Port and Maritime Management, the MBA in International Trade, Logistics and Procurement (ITL&P) together with the MBA in Sustainable Energy Management which has been carefully designed to meet current and future economic challenges.
“This is the beginning of a new era in the regional maritime sector which focuses on safety, security, energy efficiency, reducing CO2, networking and innovative solutions. The project has the potential for creating employment, entrepreneurship and aligning the Caribbean region to the rest of the world,” said Dr. Zaffar Khan, Program Director at UWI-ALJGSB and Coordinator of the project.
The TTSR was established in 2007 by the now Prime Minister of the Republic of Trinidad and Tobago, the Honourable Keith Rowley, MP when he was the Minister of Trade and Industry. Today, the maritime cluster comprises some 56-Stakeholders and includes major local and global maritime companies, such as, MASSY CAT, Massy Group (a leading provider of medium and high-speed marine diesel engines and generator sets), Robert Allan Limited (Canada's oldest privately owned consulting Naval Architectural firm, established in Vancouver, British Columbia in 1930), SHOES INDUSTRIAL Services Limited (ABS, Lloyd’s Register and DNV-GL certified suppliers and servicing of fire suppression equipment), Alstons Shipping Limited, ANSA McAL Group (a major shipping agency and cargo service provider in the Caribbean region), Maritime Preservation Limited (a leading Shipyard located in the port of Port of Spain) and Non-Destructive Testers Limited (provider of a range of inspection, testing and heat treatment services to the marine, petroleum and petrochemical sectors). The Caribbean Shipping Association also expressed their interest in being a strategic partner for this initiative.
The signing of the MOU is especially important, as the past 11 months have been the hottest such months in 135 years of recordkeeping, a streak that has itself set a record and puts in clear terms just how much the planet, including the vulnerable Caribbean region has warmed due to the build-up of greenhouse gases in the atmosphere.
• British Columbia • Canada • Caribbean