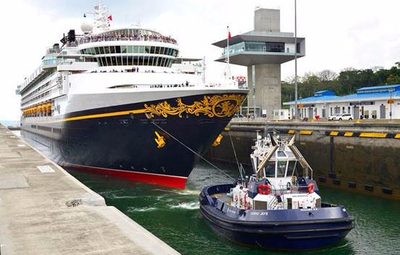 The Panama Canal announced that it expects to receive approximately 235 cruise ships through the Panamax and Neopanamax Locks during the upcoming 2017-2018 cruise season. Beginning in October, this will be the first full cruise season to welcome vessels through the Expanded Canal.

“In addition to the existing locks, cruise lines now have the option to include the Expanded Canal as part of their itineraries,” said the Panama Canal’s international trade specialist Albano Aguilar. “This will open up additional scheduling and repositioning opportunities for the industry and its larger cruise vessels, and provide new and unique experiences for their passengers.”

In April 2017, Disney Cruise Line’s Disney Wonder became the first cruise ship to ever transit the Expanded Canal. This season it will transit again along with the Caribbean Princess, Carnival Freedom, Carnival Splendor and Norwegian Bliss. Together, the five ships will make a total of 20 transits, and 11 new cruise ships will transit either the Canal’s Panamax or Neopanamax Locks for the first time from the following lines: Princess Cruise, Norwegian Cruise, Carnival Cruises, Silversea Cruises, Viking Ocean Cruises, Lindblad Special Expedition and CMA CGM, with each ship making multiple transits.

Perhaps the most visible sign of the Expanded Canal's impact on the cruise segment this season will be the Norwegian Bliss, when it makes its repositioning transit through the waterway en route to the U.S. West Coast to begin its cruise season in Alaska. Currently under construction, the ship will hold up to 4,200 passengers once complete, and will become the largest capacity cruise vessel to ever transit the Canal.

As in previous years, the main cruise lines, such as Holland America Line, Princess Cruises, Royal Caribbean Cruises, and Norwegian Cruise Line, will offer itineraries for complete and partial transits through the Panama Canal to add to their passengers’ experience. Smaller cruises, including the Wind Star and the expedition cruiser National Geographic Quest, will offer seven and eight-day itineraries, respectively, to the west coast of Central America.

The Panama Canal’s 2017-2018 cruise season begins October 2, 2017 with the partial transit of Princess Cruise Line’s Island Princess on a roundtrip voyage to and from Los Angeles with stops along the West Coast of North and Central America.
• Royal Caribbean Cruises • U.S. West Coast • West Coast