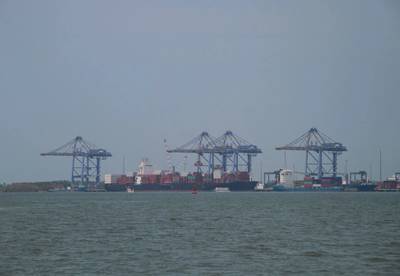 Illustration only: A port in India - Credit: babble - AdobeStock

There was no truck movement at three Adani ports in the state of Gujarat on the west coast, Mundra, Dahej and Tuna, the sources said. Additionally, berthing of container vessels was disrupted at Mundra, they said.

Two of the sources said some operations at Mundra were slowly resuming on Monday but were badly disrupted at the weekend.

"Things came to complete stop over the weekend," one of them said.

It was not immediately clear why the port operations were disrupted, and Adani did not respond to questions on the disruptions.

The company, however, has "come across rumors that Adani Group's IT infrastructure was hacked," said a spokesman, although it wasn't clear to what he was referring to. There have been no media reports of a breach of IT security at Adani Ports.

"We strongly deny such rumors. We would further like to assure all our stakeholders that our IT security is at par with global best practices," the spokesman said.

One of the sources said all trucks have been sent out of Adani's Mundra, Dahej and Tuna ports and that the ports were shuttered over the weekend.

"Importers who were scheduled to drop cargo at Mundra are actively looking to reschedule or divert it to other ports such as Kandla, and traders are scampering to arrange alternatives," the source said.

In late March, some ports in India, including those owned by Adani Ports, declared force majeure on delays and the nonfulfillment of loading and shipping contracts for any disruption caused by the COVID-19 pandemic.