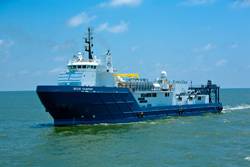 Seattle-based Elliott Bay Design Group, through its New Orleans office, was selected by Baker Hughes to provide the owner's design of the Blue Tarpon a state-of-the-art well stimulation vessel.  EBDG was contracted to integrate Baker Hughes' stimulation equipment into a hull under construction at North American Shipbuilding in Larose, LA.  The Blue Tarpon was delivered in Houston on June 9.
Working with Baker Hughes, EBDG's team designed the vessel to provide high-rate and high-volume stimulation treatments for demanding offshore operations.  The Blue Tarpon offers fracturing, sand control, acidizing, and pressure pumping operations with three blenders.  And, with one of the largest proppant and fluid carrying capacities in the world, the vessel can perform complex, multiple-zone completions without traveling back to port for resupply.
The 300-foot ship, one of the world’s largest stimulation vessels and the seventh vessel in the Baker Hughes fleet, is USCG, ABS and SOLAS classed.  The Blue Tarpon provides operators with redundancy on all key elements of the stimulation plant and incorporates enhanced safety systems, as well as redundant back-up blending and pumping capabilities which have been installed to reduce the risks associated with performing multizone, high-rate, high-pressure completions.  The ship also was designed with a focus on reliability and efficiency, allowing operators to minimize delays and associated operating expenses in high-cost offshore environments.
Blue Tarpon has a maximum pump rate of 80 barrels per minute, proppant capacity of 2.1 million pounds below deck, 750,000 pounds above deck and accommodations for up to 44 people.  It is designed to perform round-the-clock operations in deepwater plays.  The vessel’s 10 separate high-pressure pump units—housed in a fully enclosed structure to protect the equipment from the environment—can deliver up to 24,000 hydraulic horsepower and pump up to 32,000 pounds of proppant per minute.  The BLUE TARPON also features a DP-2 dynamic positioning system with twin bow thrusters and a stern thruster specifically designed to operate safely in the widest possible weather and sea conditions.
www.ebdg.com