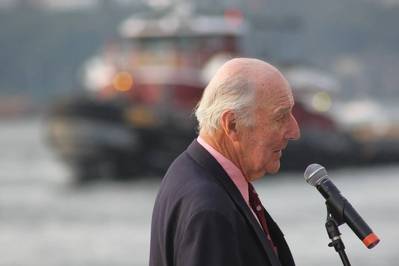 "It is with heavy hearts that we announce the passing of our beloved Captain.  Brian, who changed the future of McAllister Towing when he bought the company with his brothers and cousins, passed away peacefully this morning at his home.  We ask that you keep the McAllister family in your thoughts and hearts during this very difficult time."

Capt. McAllister was chairman of McAllister Towing, and has been with his family’s company since 1959. He received a bachelor’s degree in Marine Engineering and a U.S. Coast Guard third assistant engineer’s license from SUNY Maritime in 1956.

After graduating from Maritime, Capt. McAllister served for two years in the Navy, rising to the rank of lieutenant, junior grade and executive officer aboard LST 880. Afterward, Capt. McAllister sailed aboard McAllister tugboats and ferries, ultimately obtaining a master’s license with unlimited pilotage for many of the ports serviced by the company. In 1974, he and other members of the fourth generation purchased the company from the third generation of McAllisters. He became president of the company in 1984 and its sole owner in 1998. He has been chairman since 2013. McAllister Towing celebrated its 150th anniversary in 2014.

Today, the company, which is still family-owned and –operated, is one of the oldest and most diversified marine towing and transportation companies, operating an extensive fleet of tugs, ferries and barges.

Rhine Water Too Low Even for Some Empty Vessels