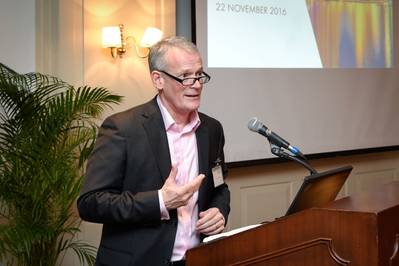 North P&I Club has further strengthened its position in the Asia Pacific region by opening a new office in Shanghai November 23, 2016. The new office, located in the Pudong district of Shanghai, complements its existing regional offices in Hong Kong, Japan and Singapore.
Joint managing director Paul Jennings announced the new office at a major reception for 150 Asia Pacific members, brokers and port authorities at the Raffles Hotel in Singapore last night. ‘We have been in Hong Kong since 1995, in Singapore since 2007 and in Tokyo since 2012. Our Asia Pacific membership continues to grow – now accounting for 34% of our total entered tonnage – so another office was needed to maintain our high service levels in the region. Shanghai, with the world’s busiest container port, was the obvious choice.’
The new Shanghai office is headed by director Gary Chen, who was previously based in North’s Hong Kong office. Chen joined North in 2003 and has extensive knowledge of the Chinese shipping sector. After graduating with an international shipping business degree from Shanghai Maritime University in 1999, he worked in the operating and chartering department of one of the largest shipping companies in China prior to attaining a master’s degree in maritime law from the University of Southampton.
Chen is supported in Shanghai by executives Gao Baohai and Linus Wang, both of whom have also relocated from Hong Kong. Gao joined North in 2012 from Chinese shipping law firm Wang Jing & Co, where he was an associate lawyer for 8 years, while Wang started in 2014 after 10 years with a leading state-owned Chinese shipping company. Chen says, ‘We will be holding a formal office opening reception on Friday this week and I look forward to building closer working relationships with the local shipping community.’
North is also strengthening its Tokyo office. Robert Crichton has just relocated from North's head office in Newcastle to lead claims and service delivery and experienced P&I claims executive Ryota Kitazawa has also just joined the team from Japan P&I Club.
• Asia Pacific • maritime law • Maritime University