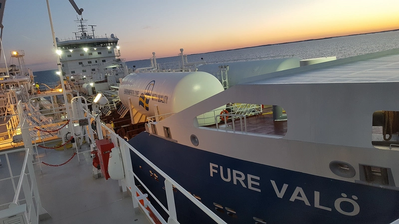 “Fure Valö”, a vessel of the tanker pool managed by the Gothia Tanker Alliance, received LNG at the anchorage area of Sandhamn, near the Swedish capital of Stockholm. The bunker operation was the first offshore ship-to-ship operation that was conducted by the 117 meter long BSV.

The bunker operation was conducted under an agreement for the supply of LNG, which was signed at the end of 2018 by Furetank Rederi, a member of the Gothia Tanker Alliance, and Nauticor. The agreement covers the supply of LNG from the BSV “Kairos” to the LNG-fuelled product tankers, which are owned and operated by members of the Gothia Tanker Alliance, including the retrofitted product tanker “Fure West” and six newbuild vessels, one of them being “Fure Valö”.

Lars Höglund, Managing Director of Furetank, pointed out the importance of a strong LNG supply infrastructure: “By using LNG as fuel for our vessels, we have significant potential to reduce the impact on the environment through lower emissions and minimizing noise. To be able to use that potential, we rely on a comprehensive LNG supply network. We are glad to see that the recent start of operations with Nauticor’s “Kairos” massively contributes to that network and makes LNG available at more locations, e.g. in the Baltic Sea.”

By using LNG, a wide range of emissions, especially sulphur, nitrogen, and particle matters, as well as carbon dioxide, can be significantly reduced.

With a tank capacity of 7,500 m³, Nauticor’s new vessel „Kairos“ is the world’s largest LNG bunker supply vessel. Nauticor chartered “Kairos” via the joint venture Blue LNG from the owner Babcock Schulte Energy, where Nauticor has a 90% share and Lithuanian energy infrastructure provider KN (Klaipedos Nafta) has a 10% share.