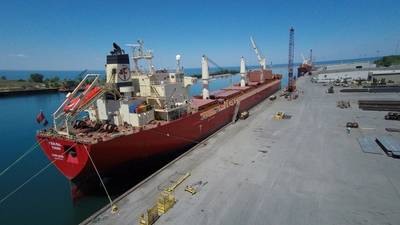 The Ports of Indiana set a record for first quarter shipments in 2018, handling 3.2 million tons at all three ports.

"Coming off a record-setting year in Mount Vernon, it's encouraging to see the upward trends continue, especially in coal and agricultural shipments, which make up over 90 percent of this port's cargo," said Phil Wilzbacher, port director for the Port of Indiana-Mount Vernon. "This first quarter certainly sets the pace for what we anticipate being another strong year for maritime shipments throughout Indiana."

The Port of Indiana-Mount Vernon also saw an increase in multimodal traffic over this time last year, as 1,075 barges, 14,419 rail cars, and 30,995 trucks carried cargoes in and out of the port.

Business activities at the Port of Indiana-Mount Vernon support over 7,000 jobs and generate more than $1 billion in annual economic impact for the state, including $348 million in wages and $33 million in state and local taxes each year. Coal, soybean meal, soybean oil, ethanol, dried distillers grain, corn, wheat, fertilizer, minerals and cement are primary cargoes moving through the Mount Vernon port.

Around the state, the Port of Indiana-Jeffersonville saw a 3 percent increase in the first quarter. This increase was driven by increases in fertilizer, liquid bulk, and salt shipments, with more salt coming through the port in the first quarter of 2018 than was handled in all of 2017. Port of Indiana-Burns Harbor saw a slight decrease in shipments year to date, but handles over 90 percent of its annual cargo in the last three quarters of the year, after the St. Lawrence Seaway opens to ocean vessels.