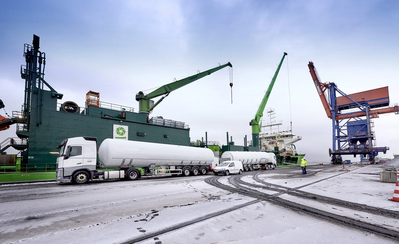 Nauticor has conducted the largest-ever LNG bunkering operation in Germany in the Elbehafen in Brunsbüttel.

The hopper dredger "Scheldt River" received 85 tons of the environmentally-friendly fuel in a truck-to-ship operation this week. Additional LNG bunker operations for "Scheldt River" are already scheduled for the Elbehafen.

On Monday, February 12th, Elbehafen Brunsbüttel, part of Brunsbüttel Ports GmbH, has established itself once again as an appropriate location for liquefied natural gas (LNG) bunker operations. The DEME Group’s Belgian-flagged hopper dredger "Scheldt River" has been supplied with LNG by Nauticor GmbH & Co. KG. The 116-meter-long dredging vessel received a total of 85 tons of LNG from 5 trucks.

The experts at Nauticor, a leading provider of LNG for maritime applications, used a bunkering technique where two LNG trucks are unloaded simultaneously, which has been successfully applied several times and allows for significant time savings when conducting a bunker operation.

Mahinde Abeynaike, CEO of Nauticor, stated confidently: "The cooperation among DEME`s ship crew, the staff of the Brunsbüttel Port, and our team has worked extremely well. Together we have proven once more that the supply of LNG for larger ships in Germany is already a reality. At the end of this year, our new LNG bunker vessel will also be put into operation, which will allow us to conduct faster and more comprehensive bunker operations.”

The "Scheldt River" is currently conducting maintenance dredging works for the water authority Wasserstraßen and Schifffahrtsamt Cuxhaven on the Elbe River between Cuxhaven and Wedel. Additional LNG bunker operations for the vessel in the Elbehafen Brunsbüttel are already planned. For the first time, long-standing demand for LNG as fuel for shipping is being generated along the Lower Elbe between Brunsbüttel and Hamburg.

LNG is seen as the fuel of the future in large swaths of the shipping industry. Due to the significant reduction in emissions compared to conventional oil-based shipping fuels, LNG is considered to be especially environmentally-friendly. By using LNG, a variety of emissions, especially sulphur, nitrogen oxide, particle matter, as well as carbon dioxide, can be significantly reduced.

Carsten Lorleberg, Project Manager for LNG at Brunsbüttel Ports pointed out: "The bunker operation for "Scheldt River" in the Elbehafen shows that LNG is increasingly establishing itself as an environmentally-friendly fuel alternative, and that LNG bunker operations can be integrated into daily port operations without apprehension. We are proud to have demonstrated again that the Elbehafen has the perfect conditions in place for LNG bunkering. This project reflects our dedicated ambition to develop, together with our partners, the industrial area and port of Brunsbüttel as the leading LNG hub for maritime and industrial applications in Germany.”

Previous successful bunking operations at the Elbehafen Brunsbüttel include the first filling of the LNG tank wagon from VTG and a truck-to-ship bunker operation for the cement carrier "Ireland". Given those operations, Brunsbüttel Ports, as well as the responsible administrative authority, the Agency for Coastal Defense, National Parks and Marine Conservation for Schleswig-Holstein (LKN), have substantial experience with the preparation, execution, and approval of LNG loading in the Elbehafen. "The cooperation with the LKN in the preparation of such activities is exemplary", Lorleberg pointed out.

Furthermore, plans for the first German LNG import terminal are taking shape in the port and industrial park at Brunsbüttel. Recently, the companies Gasunie LNG Holding B.V., Oiltanking GmbH, und Vopak LNG Holding B.V. have founded the joint venture "German LNG Terminal GmbH". The purpose of the joint venture is the construction, ownership, and operation of an import terminal for liquefied natural gas in Northern Germany, located at Brunsbüttel. Its close vicinity to the Port of Hamburg as well as to the local industrial companies creates an attractive environment for such business. Easy access to the Scandinavian and Baltic countries is permitted by the Kiel Canal, which connects the North and Baltic Seas. The terminal will offer possibilities for the diversification of natural gas supply sources and will facilitate easier access to LNG for customers who want to use the low-emission fuel alternative for their ships and trucks.