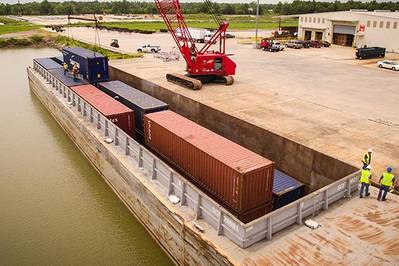 Container Loading Equipment to Provide Greater Efficiencies for Container on Barge Service Between Baton Rouge and New Orleans.
The Port of New Orleans and the Port of Greater Baton Rouge will acquire specialized container loading equipment to increase efficiencies to the current container on barge shuttle service between Baton Rouge and New Orleans with a newly announced grant of $1,758,595 from the Maritime Administration (MARAD).
"The container on barge shuttle service, operated by Seacor AMH, and the application for the MARAD grant have been joint projects for Baton Rouge and New Orleans, with both ports working together for over a year," said Jay Hardman, executive director at the Port of Greater Baton Rouge.
The shuttle service, which began earlier this year with five barges per week, is a regularly scheduled container on barge service that supports exports moving from the Baton Rouge area to the Port of New Orleans, where the containers are loaded onto container vessels.
The new service was designed to collect empty containers in Memphis, Tenn., and transport them to Baton Rouge to meet customer demand for chemical industry exports. It also provides exporters with new, more efficient transportation options and offers a waterway alternative to re-position empty equipment that would otherwise move via truck or rail.
"We are pleased to have received this grant and to be working with the Port of Greater Baton Rouge to provide effective container on barge service," said Brandy Christian, chief operating officer at the Port of New Orleans. "In addition to the economic and operational benefits, the operation has a positive environmental impact. We estimate the service could potentially eliminate about 12,500 truck trips each year on local highways and interstates."
The grant, awarded jointly to the two Louisiana ports and administered by the Port of Greater Baton Rouge, is one of six Maritime Highway projects to receive a portion of the total $4.85 million awarded by MARAD.
"These grants will help us take advantage of the economic and environmental benefits of one of America's most crucial transportation assets -- our coastal and inland waterways," said U.S. Transportation Secretary Anthony Foxx.
U.S. Maritime Administrator Paul "Chip" Jaenichen added, "It is essential that we invest in integrated, multimodal transportation systems that support the efficient movement of freight and people throughout this country. Our nation's extensive network of waterways and domestic seaports provide an opportunity to help stimulate economic growth while reducing congestion on our national freight transportation system."
SEACOR AMH, operator of the shuttle service, and PORTS AMERICA, terminal operator and stevedore at the Port of New Orleans and Port of Greater Baton Rouge, were also strategic partners in developing the shuttle service and obtaining the grant.
• America • Anthony Foxx • Brandy Christian