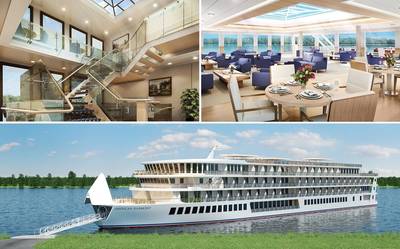 American Harmony’s lower bow section has moved from Fabrication Building #4 at Chesapeake Shipbuilding to the Assembly Launchways. The second new ship in American Cruise Lines five-ship, modern riverboat series is well on its way to completion.

American Harmony, like American Song (which just made its inaugural sailing earlier this month), will be equipped with every technical advancement and offer the best in contemporary design including a magnificent five-story glass atrium. Each ship in American’s modern riverboat series has a very unique bow ramp which extends and retracts from the bow of the ship and enables bow landings wherever needed.

American Cruise Lines is pleased to offer American Harmony and American Song in addition to their traditional paddlewheelers already sailing along the Mississippi and the Columbia and Snake Rivers. Leading the industry with their diverse fleet of three distinct ship styles, American Cruise Lines’ revolutionary new modern riverboats are a dramatic departure from the iconic paddlewheelers that have traveled U.S. Rivers since the 1800s.