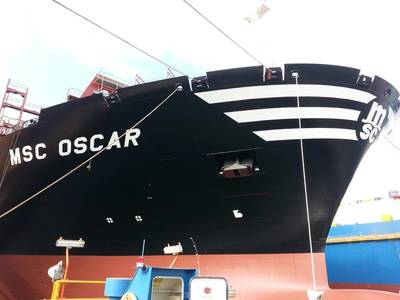 With the launch of MSC Oscar, Mediterranean Shipping Company (MSC) sets a new record in terms of TEU capacity; at 19,224 TEU, the vessel is largest containership ever built.The ship was officially inaugurated at the Daewoo Shipbuilding and Marine Engineering (DSME) Shipyard in South Korea on January 8, 2015 and will service trade routes between Asia and Europe.
According to Lukoil Marine, who supplies lubricants to more than 100 vessels in the MSC fleet, MSC Oscar’s size isn’t its only impressive aspect. MSC demonstrates its concern for the environment by equipping the MSC Oscar with increased fuel efficiency engines for a healthier supply chain. For all its new orders, MSC trusts in the technology developed by Lukoil Marine Lubricants: the iCOlube, an “intelligent cylinder oil lubrication” unit optimizing both the performance and overall efficiency of vessel engines.
And as noted by Pasquale Formisano, Senior VP in MSC Geneva, “The partnership will continue with MSC’s next new vessel, MSC Oscar’s sister ship MSC Oliver, which will be launched in April 2015.”
• Mediterranean Shipping Company • Lukoil • Europe