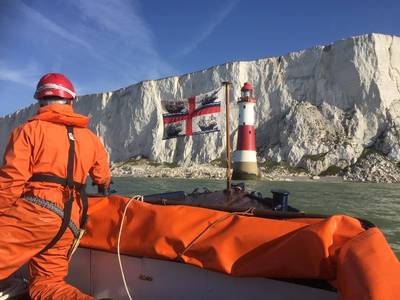 The UK Department of Transport is to order new vessel for Trinity House to replace the THV Patricia and provide safety information and guidance for ships in UK waters and abroad. A Trinity House workboat approaching Beachy Head Lighthouse on the south coast of England. Trinity House’s fleet of support vessels carries out a number of activities around England, Wales and the Channel Islands in support of its role as a General Lighthouse Authority. (Photo: Trinity House)

The UK’s Department for Transport is to acquire a new ship for the General Lighthouse Authority Trinity House to replace THV Patricia, which has been in service since 1982, to ensure other vessels continue safe and smooth operations in UK waters and overseas. The General Lighthouse Authority is responsible for providing more than 600 aids a year to navigation around UK waters, including ships, lighthouses and buoys. The as yet unnamed vessel will deliver critical navigation aids to ships in some of the most dangerous waters in the world, including the use of the latest technology to guide ships into safe channels away from wrecks.

UK Maritime Minister Nusrat Ghani stated: “Our maritime sector is crucial to UK trade, with 95 percent of our imports and exports transported by sea. With our waters becoming busier all the time, dealing with incidents quickly and efficiently is more important than ever. This new ship will support the General Lighthouse Authority to help future-proof their fleet and continue to support maritime safety and trade for generations to come.”

The UK Government has launched a tender invitation to the shipbuilding industry to develop plans for the new vessel, which will join Trinity’s existing fleet.

Earlier this year, the Department for Transport announced its Maritime 2050 Strategy, with the aims of reducing the environmental impacts of shipping and supporting UK-based businesses.