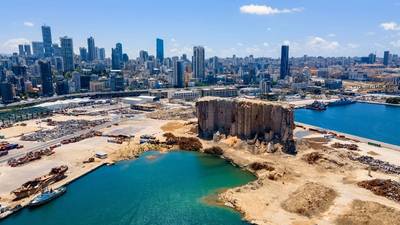 Lebanon's judiciary is seeking to appoint a second judge to a stalled investigation into the Beirut port blast, sources said, highlighting deep divisions over efforts to hold officials to account over a tragedy that killed more than 220 people.

Judge Tarek Bitar's investigation into the 2020 explosion, which flattened swathes of the city when hundreds of tonnes of stored ammonium nitrate detonated, has been suspended since late 2021 by lawsuits brought by politicians whom he has sought to question.

That has left him unable to summon suspects or press charges, but also means individuals detained after the blast have remained in custody.

In the letter, dated Monday, Justice Minister Henry Khoury urged the Higher Judicial Council to appoint a judicial investigator "to work on urgent and necessary matters" in the case.

The appointee would stay in place "as long as the original investigator cannot carry out his missions," according to a copy of the letter seen by Reuters, which cited some detainees' deteriorating health as the driver for the request.

The Judicial Council agreed to the plan, and Khoury would now propose candidates, a senior judicial source said, adding that the new judge would not be empowered to charge suspects.

Khoury did not respond to a request for comment.

A second judicial source said Bitar considered the move "illegal", would not step down from his role and was keen to return to investigating in full.

Judges in Lebanon are often subject to influence from the governing elite, whose tradition of dividing up power along sectarian lines has been instrumental in plunging the country into its worst political and economic crisis in decades.

Relatives of victims of the blast protested the plan outside the justice ministry on Wednesday, accusing politicians of compromising the investigation by keeping it suspended while releasing some detainees.

"Shame on every official... playing this game," said Mireille Khoury, whose teenage son Elias died in the blast. "I'm imprisoned in this life for good."

A group of independent lawmakers denounced it for "gross violations" of the judicial process said it was intended as a "final blow" to Bitar's role, according to a statement.

On Tuesday, two parliamentarians allied with President Michel Aoun publicly called for detainees no longer considered parties to the blast to be released.