Largest Oil Shipment Sent from Vancouver to China Since 2015 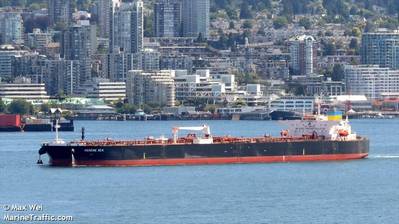 An Aframax tanker is scheduled to deliver the largest shipment of crude oil from Vancouver to China since January 2015 later this month, Thomson Reuters trade flow data show.

For years, Canadian officials have pushed for an escalation in crude exports to rapidly growing Asian markets, but companies in the oil-rich Alberta have limited capacity to move crude to the nation's western coastline.

That makes Canadian crude exports from Vancouver to Asia rare, but shipments have picked up in recent months, with oil tankers to China, Thailand and South Korea departing in April and July. Most of the crude shipped from Vancouver - which has limited export capacity - is carried to the U.S. West Coast.

The Serene Sea, an Aframax tanker carrying about 514,000 barrels per day, loaded at Kinder Morgan's Westridge Marine Terminal in Vancouver and departed on July 4. The vessel is scheduled to arrive in Guangdong, a southern Chinese province, on July 26, bringing Canadian exports to China to 16,600 barrels per day (bpd) for the month.

The voyage follows that of the Solomon Sea, which in April left Vancouver for ports in Thailand and South Korea. Another tanker, Diva, departed Vancouver for Zhejiang in eastern China the same month. They carried a combined 742,000 barrels to Asian buyers, according to Thomson Reuters data.

"The Brent-WTI spread has narrowed and there's less call for U.S.-based crude," said Thomas Finlon, director of Energy Analytics Group LLC. "There is an opportunity for Canada to send material to China, but I don't think demand is going to be overwhelming."

In another rare Asian transaction earlier this month, the Shenlong Spirit carried 953,000 barrels from Alaska's Petrostar refinery to China, the first U.S. oil export from Alaska to China since May 2017.