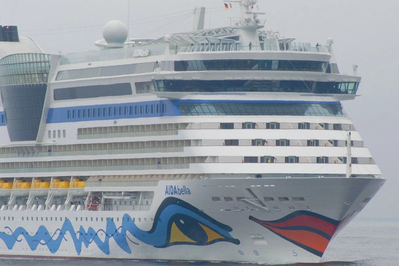 Kiel closes its latest cruise shipping season on Sunday, October 28th with the visit of the AIDAbella.

This year the port has been visited 166 times by 33 different cruise ships with a combined gross tonnage of more than 11 million. For the first time close to 600,000 cruise ship passengers, 16.4 percent more than last year, have passed through the port’s terminal facilities to end or embark on cruises.

Dr. Dirk Claus, Managing Director of the Port of Kiel (SEEHAFEN KIEL GmbH & Co. KG), declared, “We have posted a good result and continue to invest in the expansion of our infrastructures for passenger and baggage handling as well as in the protection of the environment.” Already this season a new hall for baggage handling has been completed in the Ostuferhafen and work is now in full swing at the Ostseekai Terminal on the construction of a second passenger handling terminal. Kiel has set itself an ambitious time-table and will take the new nine million Euro terminal building into operation as early as 2019. Following that, construction will begin on the first DIN-certified, shore-based power supply facility for cruise ships. The investment, totaling more than 20 million Euros overall, will further increase the attractiveness of the Port of Kiel. “We will continue to grow,” Claus said. “Cruises in northern Europe are in much demand and always attract top passenger numbers.”

The 2018 cruise shipping season in Kiel was marked by numerous highlights. One of them was the visit of TUI Cruises’ latest new building the Mein Schiff 1, which visited the fiord and ended her maiden voyage at the Ostseekai Terminal. The biggest ship to call was the 139,000 GT MSC Preziosa, which undertook 20 Baltic and Nordic cruises from Kiel. The Fiord’s most frequent visitors were the ships of AIDA Cruises, five of which were based in Kiel for the first time. Unique to date were this season’s nine maiden visits – seven of them by ships which were visiting Kiel as part of ongoing cruises. Claus said, “In addition to its function as a base port, Kiel is also being increasingly utilized as a stepping off point for day trips ashore. International cruise ship travelers have this year discovered Schleswig-Holstein as a holiday destination.”  Among visitors to Kiel have been the shipping companies Cunard, Fred. Olsen, Holland America Line, Ponant, P&O and Saga, as well as new customers Pullmantur and Viking Ocean Cruises. From a port operations point of view, attention was focused particularly on the twelve occasions when three, sometimes even more, ocean-going cruise ships were berthed in the port in addition to the regular Baltic ferries. The high point of the season was on August 11th when five ocean-going ships - AIDAaura, AIDAluna, Astor, Costa Pacifica and the MSC Preziosa - all berthed.

As far as the coming season is concerned, further growth in the size of ships is expected. AIDA Cruises’ 124,000 GT AIDAprima will be stationed in Kiel and can now be supplied with environmentally friendly LNG fuel during her berth time. An even bigger ship is the 171,600 GT MSC Meraviglia which has accommodation for up to 5,700 passengers and will set a new tonnage record for Kiel.

The most frequent callers will once again be the ships of AIDA, TUI Cruises, MSC and Costa – with the latter’s Costa Pacifica doubling the number of cruises from Kiel. New to Kiel among others will be the Nieuw Statendam of Holland America Line. The complete list of callers in 2019 will be published by the Port of Kiel at the turn of the year.