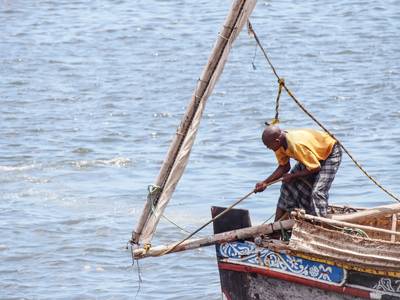 Activists hailed a Kenyan court for ordering that almost 5,000 fishermen at a 14th century World Heritage Site receive millions in compensation for the loss of traditional fishing rights due to the construction of a major port.

The fishermen in Lamu, the oldest Swahili settlement in East Africa, won 1.76 billion shillings ($18 million) in compensation this week from a court in the nearby town of Malindi, which also said their rights to culture and information had been violated.

"We were happy with the judgment," Mohamed Somo, chairman of the Lamu Beach Management Unit, a fishermen's association, and a witness in the case, told the Thomson Reuters Foundation.

"Fishermen used to go fishing in the morning and come back in the evening. But now they take two to three days and are away from their family for all that time."

Environmentalists say construction, since 2012, of the multi-billion port at Manda Bay, which juts out into the Indian Ocean towards the islands of Lamu, Manda and Pate, is destroying delicate marine life and choking coral reefs and mangroves.

Somo said fishermen in the ancient Arab town had suffered because dredging had destroyed vegetation which reduced fish populations near the shore.

A lawyer with LAPSSET who declined to give his name as he is not authorized to talk to the media told the Thomson Reuters Foundation that they were studying the judgment and would give a statement after a board meeting next Wednesday.

The court also gave Kenya's environmental management agency one year to reconsider the Environmental Impact Assessment licence that it had issued for the project, saying that it did not include adequate protections.

"This failure creates a verifiable and imminent risk to the violation of the right to a clean and healthy environment of the petitioners and residents," the judgment said.

The project's backers need to share more information with residents and to consult them on how to protect the cultural identity of the region, it added.

Although the court said the government violated the law by failing to compensate the fishermen, which was a requirement of the licence issued in 2014, some feared it still would not pay.

"(The fishermen) are very happy but they are very apprehensive that the government might not comply with the orders," said Soyinka Lempaa, a lawyer with the Katiba Institute rights group, who represented them in court.