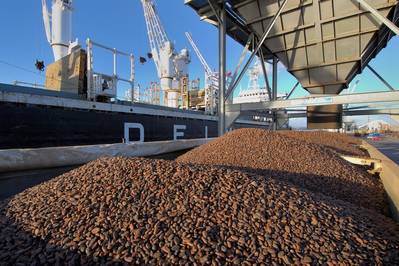 A lack of shipping containers due to the pandemic has also contributed to the slowdown, forcing Ivory Coast's cocoa regulator, the Cocoa and Coffee Council (CCC), to limit the issuance of documents that clear bean deliveries at ports for shipment.

This has caused a stockpile of more than 80,000 tonnes of beans in farm warehouses and stores, waiting to be shipped to ports, the officials said, requesting anonymity because they are not authorized to speak.

"We have not been able to deliver cocoa at the port because we cannot get the bill of lading. When you make the request, the CCC system rejects the request after a few days," a director of a Soubre-based cocoa cooperative in the heart of the country's cocoa belt, told Reuters.

The director said the cooperative has been sitting on a stock of 700 tonnes of cocoa for the past 45 days.

Cocoa arrivals at the country's two ports slowed to around 14,000 tonnes this week from around 26,000 tonnes in late June.

Two senior sources at the CCC told Reuters that the regulator had asked exporters to only collect beans at ports which they are ready to ship because of the lack of storage.

"The CCC has asked us to only accept bills of lading that we can unload to avoid queues outside our factories," a commercial director of an Abidjan-based European cocoa export company said.

The CCC sources and exporters said the regulator had issued the directive as the rationing of electricity led to a drop in cocoa grinding and processing capacity, creating the stockpile.

Cocoa grinding dropped 22% in June, while the export of beans and semi-finished cocoa products were down 23% year-on-year because of container shortages at the Abidjan and San Pedro ports. Meanwhile, freight costs have doubled, exporters said.

Another director of an export company said they had missed ten ships over the past two months because of the lack of containers. An Abidjan-based shipper told Reuters the tight container situation is expected to ease around February 2022.

"We can't really export the cocoa we have because there are no containers. The freight has more than doubled but despite this, there is no container so we are accumulating stock here and are forced to slow down our activities," said a third director of an international export company in Abidjan.