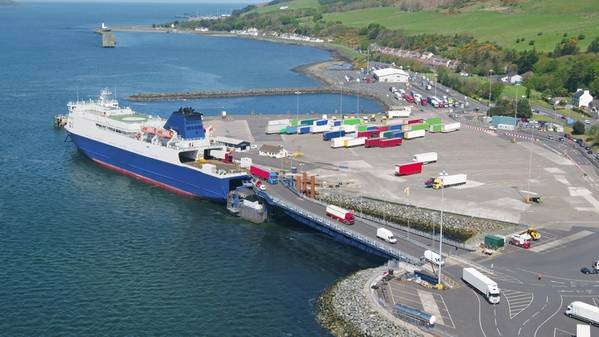 Northern Ireland temporarily suspended some post-Brexit checks at two ports on Monday after a local council withdrew staff over concerns for their safety and police said they planned to increase patrols at points of entry.

Many pro-British unionists fiercely oppose the new trade barriers introduced between Northern Ireland and the rest of the United Kingdom as part of the Northern Ireland protocol, a standalone deal for the region after Britain left the EU.

The council whose staff inspected goods at Larne Port said serious concerns around their safety were raised after a rise in "sinister and menacing behavior" in recent weeks, including the appearance of graffiti describing port staff as "targets".

Northern Ireland First Minister Arlene Foster, whose Democratic Unionist Party (DUP) has been calling on London to seek to remove the new trade barriers, described the actions against the port staff as utterly reprehensible.

"I have to say to them to desist. If you are against the protocol, as all unionists are, the way to deal with this is through constitutional politics," Foster told Northern Ireland broadcaster UTV.

Northern Ireland's agriculture department said it had suspended physical inspections of products of animal origin at Belfast and Larne ports but said that documentary checks will continue to be carried out as usual.

Northern Irish police said they planned to increase patrols at ports and would meet with partner agencies to discuss the matter on Tuesday.

The British-run region remains deeply divided along sectarian lines even after a 1998 peace deal, with Catholic nationalists aspiring to unification with Ireland and Protestant unionists wanting to remain part of the UK.

A "blunder" by EU officials in briefly invoking and abruptly reversing emergency powers in the Northern Ireland protocol during a showdown with Britain over COVID-19 vaccines in recent days further angered unionists.

"The (British) government need to give a very clear signal that they will deal with the issues around the protocol. It must be sorted quickly," Foster said.