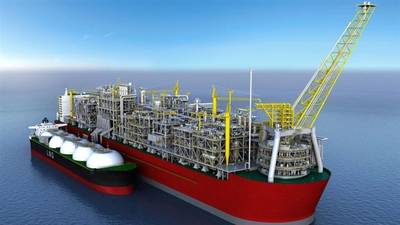 Minister of Petroleum, Bijan Zangeneh said that Iran and Belgium are in talks for possible floating production of liquefied natural gas (LNG) FLNG Unit off the Kharg Island in the Persian Gulf.

The issue was brought up during Zangeneh’s talks with Belgian Secretary of State for Foreign Trade, Pieter De Crem in Tehran on Monday as the two sides look to new areas of cooperation ahead of the lifting of sanctions on Iran.
"If the two sides show flexibility and technical and economic negotiations bear results, (the Belgian side) will bring FLNG facilities to the Kharg region in not a distant time and Iran will begin producing LNG for the first time," he said.
Belgium's Exmar is expected to bring the world’s first floating LNG facility online later this year.
The floating LNG concept, which does away with piping gas to onshore plants, has not been put into practice yet. The method involves production units moored above offshore gas fields and liquefying the supply for onward shipment.
Iran plans to build a capacity for exporting 40 million metric tons a year of LNG which is super-cooled to minus 162 degrees Celsius for shipment by special tankers.
It has signed preliminary agreements with Korean, German and Chinese shipbuilders to construct high-tech LNG tankers, the man in charge of the project Esmail Sadeqi said on Saturday.
The country also plans to revive its onshore LNG projects. It had contracts with Royal Dutch Shell, Spain’s Repsol and France’s Total to build three LNG plants but they abandoned the projects in 2010 under US and European pressures.
On Monday, Zangeneh said Belgians were interested in investment in Iran’s petrochemical sector.
"Prior to sanctions, Belgian firms were active in marine engineering services and environmental projects in Iran. Bilateral trade stood at $1 billion which the Belgians insist to return to that level," he said.
• Royal Dutch Shell • liquefied natural gas • LNG facility