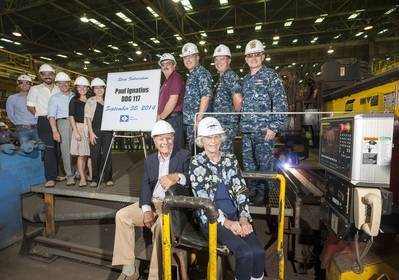 Paul Ignatius is the 31st Aegis destroyer to be built at Ingalls. The start of fabrication signifies the first 100 tons of steel cut. From this point, shipbuilders will assemble the destroyer using modular construction, where pre-fabricated units are constructed separately and later lifted in place and integrated with other units.

"The start of fabrication begins to bring the ship to life," said Ingalls' DDG 51 program manager, George Nungesser. "Having Paul and Nancy Ignatius here with us today builds a relationship between them, the ship and our shipbuilders. As we continue to cut steel and assemble this next destroyer, the Ignatius family will play a big role in watching the ship transform from these pieces of steel into the mighty warship it will become, bearing Paul Ignatius' name."

Paul and Nancy Ignatius will visit the ship throughout its construction to witness progress and meet with Ingalls shipbuilders. Paul Ignatius served as Secretary of the Navy from 1967 to 1969 and was the Assistant Secretary of Defense during President Lyndon B. Johnson's administration. "This is the beginning of the process," he said. "While touring Ingalls, the complexity of building a ship is evident, and it's impressive how all the different parts will come together."

To date, Ingalls has delivered 28 DDG 51 destroyers to the Navy. The highly capable, multi-mission ship can conduct a variety of operations, from peacetime presence and crisis management to sea control and power projection, all in support of the United States' military strategy. DDGs are capable of simultaneously fighting air, surface and subsurface battles. The ship contains myriad offensive and defensive weapons designed to support maritime defense needs well into the 21st century.

Huntington Ingalls Industries designs, builds and manages the life-cycle of the most complex nuclear and conventionally-powered ships for the U.S. Navy and Coast Guard. For more than a century, HII's Newport News and Ingalls shipbuilding divisions in Virginia and Mississippi have built more ships in more ship classes than any other U.S. naval shipbuilder. HII also provides engineering and project management services expertise to the commercial energy industry, the Department of Energy and other government customers. Headquartered in Newport News, Virginia, HII employs more than 39,000 people operating both domestically and internationally.