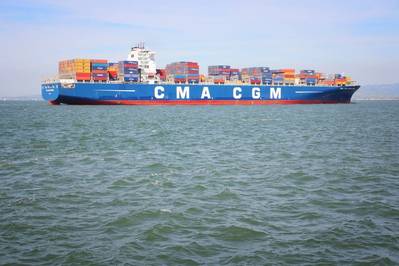 CMA CGM, the world's fourth-largest container shipping line, will impose emergency congestion surcharges at Cape Town port in July due to disruptions caused by the coronavirus, it has told customers.

Western Cape province, which includes Cape Town, is the epicenter of South Africa's coronavirus outbreak, accounting for about half the nation's total of the more than 144,000 infections and about two thirds of its 2,529 deaths.

The surcharge would apply from Wednesday for non-Federal Maritime Commission (FMC) trade and from July 18 on FMC trade.

A South Africa-based official at CMA CGM did not immediately respond to a request for comment.

"Despite all the challenges, we have been able to reduce the number of vessels at anchorage from 11 vessels to five vessels today," Velile Dube, acting chief operations officer at Transnet Port Terminals, said in a statement on Tuesday.

The Citrus Growers Association said container exports from the Western Cape were now mostly being trucked to Port Elizabeth and the Port of Ngqura in Eastern Cape.

The Mediterranean Shipping Company (MSC) told customers this month it would split its main European service and set up a temporary route calling at Cape Town weekly to ease congestion. An MSC company official was not immediately available to comment.