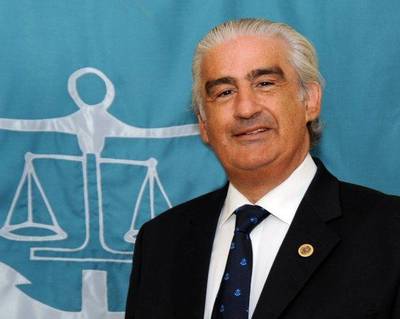 Professor Attard was nominated for the award by the Republic of Malta. In the nomination, the impact that Professor Attard has had on the maritime world, particularly via his three-decade-long role at IMLI was highlighted.

The Maltese national was responsible for proposing, in 1987, together with the late Dr. Joseph Fenech, former Maltese Parliamentary Secretary and Minister, the establishment of IMLI to then IMO Secretary-General C.P. Srivastava.

"During his tenure with the institute, Professor Attard has overseen the training of more than 1,000 maritime professionals from more than 150 States – many of whom have gone on to represent their countries as delegates to the various IMO bodies. This has contributed to capacity building in many regions and supported IMO's goals of promoting safe, secure, environmentally sound, efficient and sustainable shipping through cooperation," IMO said.

Professor Attard is also President of the Chamber for Marine Environment Disputes and is a judge for the International Tribunal for the Law of the Sea.

He served as Special Adviser to IMO Secretary-General C.P. Srivastava, who was overseeing the development of a substantial international maritime legal framework to ensure safer shipping on cleaner oceans.

In response to reported difficulties by many States in incorporating IMO instruments into national legislation due to a lack of local expertise in the field of international maritime law, Professor Attard proposed the establishment of the IMLI in Malta. The Institute was set up in 1988.

Initially serving as an advisor to the founding Director and an active teacher who crafted the Institute's first syllabus, Attard became a Member of the IMLI Governing Board in 1989. He was appointed Director of the Institute in 1992.

"The work of the Institute, with Professor Attard at the helm, has been recognized by various international bodies including the IMO Assembly, IMO's Technical Cooperation Committee and the United Nations General Assembly," IMO said.

Worth noting, Professor Attard was also the first Chair of the Legal Committee of the Intergovernmental Panel on Climate Change (IPCC) and has been praised for spearheading the 1988 Maltese UN Initiative - which led to the recognition of climate change as a common concern of humankind. This work culminated in the adoption of the 1992 United Nations Framework Convention on Climate Change, by the Rio Conference on Environment and Sustainable Development, and of the subsequent Kyoto Protocol. Professor Attard currently serves as President of the Chamber for Marine Environment Disputes (since October 2020) and is a judge for the International Tribunal for the Law of the Sea since 2011, having been Vice-President of the Tribunal (2017-2020).

Seven Charged with Labor Racketeering in the Port of San Juan