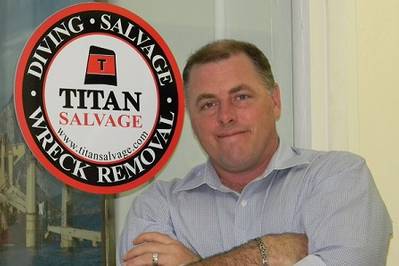 Veteran Salvage Master Shelby Harris has been named Titan Salvage’s new director of marine operations in Asia, where he will bring more than 15 years of experience responding to large-scale domestic and international salvage and wreck removal projects. He will be based out of the company’s Singapore office and equipment depot, a 45,000-square-foot site west of the city, and report to Titan’s Director of Operations Patrick Keenan.

Harris will be in charge of spearheading operational efforts and continuing to strengthen the team in the region, where Titan has continued to grow its presence, response and capabilities since opening there in 2009.

Harris joined TITAN in 1998 as a commercial diver shortly after graduating from the Divers Institute of Technology in Seattle. He quickly moved up the organization with roles of increasing responsibility to his most current position as salvage master, which he assumed in 2004 after being part of more than a dozen large-scale projects – responding to several wreck removal and emergency response activities throughout the world, including those in the Western Pacific and Indian Oceans. He also recently coordinated a 70-man dive team for grouting operations on the stabilization phase of the ongoing Costa Concordia project off the island of Giglio, Italy, and helped ensure the successful wreck removal of the New Carissa off Coos Bay, Oregon. Harris’ work has also been featured in several news publications and TV news segments.