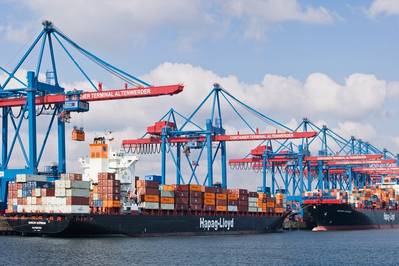 German shipping line Hapag Lloyd is close to completing a merger with United Arab Shipping Company (UASC) after UASC's shareholders agreed terms to repay outstanding debts, sources familiar with the talks told Reuters.
The deal to create the world's fifth-biggest shipping company, valued at about 7 billion to 8 billion euros ($7.8-$8.9 billion), had been scheduled to complete at the end of last year.
It would give Hapag Lloyd access to bigger ships on the major Asia to Europe trade route. The Hamburg, Germany-based company reported deepening losses in the first quarter as fuel costs grew and freight rates fell.
But Hapag Lloyd and Gulf-based banks involved in the talks demanded that UASC shareholders stump up more funds to help the combined company through an unprecedented downturn in the container shipping industry, according to people familiar with the talks.
Sources also told Reuters in March that some of the syndicate banks and Hapag Lloyd also wanted a commitment that UASC's top shareholder Qatar would remain committed to the deal in the long term and not lower its stake in the combined group.
Those obstacles have now been overcome, finance sources said on Thursday. One said the Qatar Investment Authority (QIA) had offered the necessary assurances over its stake. Both added that syndicate banks had begun to receive the shareholder funds, clearing the way for formal completion.
"The deal is finally moving to a close," said one of the sources who declined to be identified, citing the sensitivity of the negotiations.
A spokesman for Hapag Lloyd confirmed that the transaction was expected to close by the end of May as the parties worked through final financial details of the combination, without commenting further.
The two finance sources and a shipping industry source said a joint management team for the merged group was not yet in place, but one of the sources said that was not seen as a "deal breaker".
Job Cuts
It was unclear whether job cuts or a move to limit duplication on shipping routes were being planned.
Shipping lines are still struggling with too much capacity after a decade-long shake-out that began after the global financial crisis that slashed profits and proved fatal for South Korea's Hanjin.
Hapag Lloyd Chief Executive Rolf Habben Jansen has said he underestimated the complexity of the deal. Qatar owns 51 percent of UASC, Saudi Arabia has 35 percent and the rest is owned by the United Arab Emirates, Bahrain, Kuwait and Iraq.
Qatar will hold 14 percent in the merged group via QIA's subsidiary Qatar Holding LLC, while Saudi Arabia will have a 10 percent stake, UASC has said. The structure of the deal, presented by both sides as a merger, has not been disclosed.
QIA, one of the world's largest sovereign wealth funds, declined to comment, while UASC did not immediately respond to a request for comment.
The fate of UASC's United Arab Chemical Carriers (UACC), a small subsidiary of UASC which needs to be sold in terms of the merger, has been an added complication. No buyers have yet emerged for UACC, which is valued at up to $200 million.
The two finance sources said QIA and Hapag Lloyd may have to step in to acquire all the shares in UACC if no buyer can be found.
In 2013, a planned merger between Hapag-Lloyd and Hamburg Sud was called off as terms could not be agreed. The world's top container group Maersk Line is acquiring Hamburg Sud in a 3.7 billion euro deal.
Hapag Lloyd shareholder, travel company TUI Group, said on Wednesday it would look at a possible sale of its Hapag stake once the merger is completed.
(By Jonathan Saul and Arno Schuetze, Additional reporting by Tom Finn in Doha and Jan Schwartz in Hamburg)
• Bahrain • container • Europe