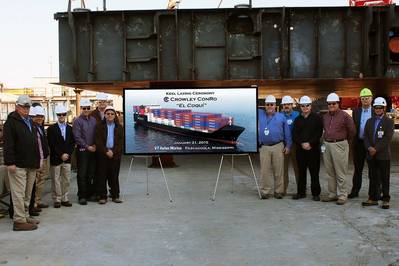 The keel laying ceremony marked the next step in the construction of Crowley’s first Commitment Class ship, which will exclusively serve the U.S.-Puerto Rico trade lane, replacing the company’s towed triple-deck barge fleet in the South Atlantic trade which served the trade since the early 1970s.

The new Jones Act ships, to be named El Coquí (ko-kee) and Taíno (tahy-noh), will be built at the Pascagoula facility, with deliveries scheduled for mid and late 2017, respectively. The ship design is provided by Wartsila Ship Design in conjunction with Crowley subsidiary Jensen Maritime.

The new Commitment-Class ship has been designed to maximize the carriage of 53-foot, 102-inchwide containers. The ship will measure 219.5m long, 32.3m wide (beam), with a deep draft of 10m, and an approximate deadweight capacity of 26,500 metric tons. Cargo capacity will be approximately 2,400 TEUs (20-footequivalent-units), with additional space for nearly 400 vehicles in an enclosed Roll-on/Roll-off garage.

The main propulsion and auxiliary engines will be fueled with LNG. According to Crowley, the ships will set a new standard for environmentally responsible shipping as LNG, a stable gas that is neither toxic nor corrosive and is lighter than air, is the cleanest fossil fuel available, netting a 100-percent reduction in sulphur oxide (SOx) and particulate matter (PM), and a 92-percent reduction in nitrogen oxide (NOx). LNG also has the ability to significantly reduce carbon dioxide (CO2), a contributor to greenhouse gas emissions, as compared with conventional fossil fuels.

Bill Skinner, Chief Executive Officer at VT Halter Marine, said, “This keel laying is a major milestone event in the construction schedule for the Crowley Commitment-Class Program. We are pleased that construction is underway for this very significant vessel. We are most grateful to our valued customer, Crowley, for their continued confidence in VT Halter Marine.”

VT Halter Marine and Crowley entered into a contract for the pair of ships in November 2013 and construction began with the first steel plate cutting in Pascagoula on October 22, 2014. The shipbuilder began to assemble the keel once enough steel pieces had been cut. With the first section set into place, the ship will now begin to take shape as it is built around the keel.

“A long-standing tradition, the keel laying marks the ceremonial beginning of the ship’s construction,” said Crowley’s Todd Busch, senior vice president and general manager, technical services. “The keel forms the backbone of a ship and is the first part of the ship to be constructed. We at Crowley are very excited to begin the construction process for these technically advanced ships.”