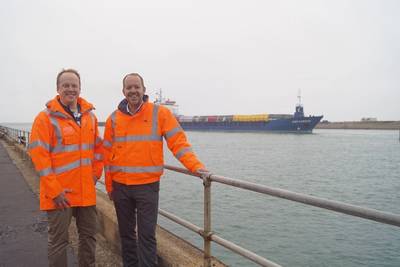 H2 Green, a Getech business, signed a deal with Shoreham Port to develop a renewable energy hub designed to remove emissions from its fleet of trucks and HGVs and be a catalyst for the wider region’s transport decarbonization.

The development will include the creation of a hydrogen hub integrated with onshore wind and solar power generation.
With transport decarbonization high on the agenda at COP26 last week, the development will provide 100% green hydrogen and renewable electricity to the Port’s fleet of heavy forklift trucks and HGVs in its first phase, with the ambition to supply hydrogen to fuel the 800 HGVs that enter the Port each day, reducing emissions and noise.

The plans from the Edinburgh based infrastructure developer also include an ammonia importation facility, which would be used to carry hydrogen, connecting the Port to large scale green energy projects worldwide, which would deliver lower cost green fuel to benefit local users.

Shoreham is a Trust Port with a 260-year history of delivering value to the local community. The innovations will help the Port to achieve its own net zero by 2030 ambition and decarbonise the South East England region.

“The project has the potential to make a significant contribution to the net zero ambitions across South East England through the local generation of hydrogen from renewable energy," said Tom Willis, Chief Executive, Shoreham Port. “The hydrogen production process is quiet, odourless and the clean fuel produced will reduce emissions across the region as transport operators convert large fleets to run on it. As a community organisation we intend to work with all our stakeholders to make this new stage of Shoreham Port’s development a success.”

The green energy hub will drive regional growth in commercial transport hydrogen stimulating the development of local and global supply chains.
Industries operating in and adjacent to the Port, including gas-fired power generation, timber, steel handling, and water treatment, are also potential customers for the hub’s hydrogen power. By-products such as oxygen can be used to treat local sewage in a clean and efficient way to prevent planned releases to sea.

Following finalization of engineering designs and receipt of planning approvals, the parties expect to move to a structured series of Final Investment Decisions in the second half of 2022.