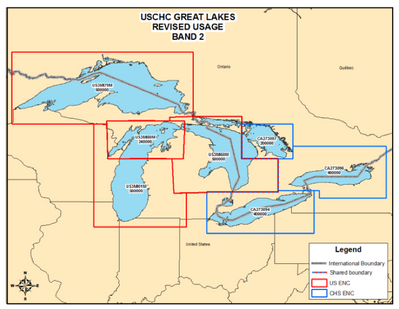 New changes will soon take effect in the Great Lakes. Under the new ENC coverage scheme, each country is changing their areas of coverage so that only one country’s ENC is available for any given area at a particular scale.

The U.S. and Canada are making these changes to comply with the International Hydrographic Organization Worldwide Electronic Navigational Chart Database principles . According to those principles, countries should avoid ENC duplication, with only one country responsible for producing electronic charts for any given area. The U.S. and Canada revised ENC coverage last year for overlapping regions in Pacific and Atlantic regions.