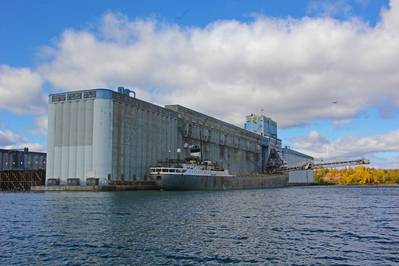 Year-to-date U.S. grain shipments (wheat, soybeans and corn) via the Seaway totaled 1.3 million metric tons, up 10.7%. The recent boost comes from Midwest grain exports heading to global destinations such as the United Kingdom, Israel and Portugal.

Project cargo shipments so far this season, such as wind turbine components, also continue to hold strong, up 71%. Other cargo segments such as iron ore (-16%), dry bulk (-15%) and liquid bulk (-32%) remain down due to the economic repercussions of the pandemic.

“There is strong world demand for U.S. grain products like wheat and soybeans and that’s led to increasing export volumes through the Great Lakes-St. Lawrence Seaway. We expect this momentum to continue heading into the busiest months of the season,” said Bruce Burrows, President and CEO of the Chamber of Marine Commerce. “In November and December, manufacturers stockpile inventory for the winter months, municipalities stock up on road salt ahead of the snowy weather and grain exports are pushed out before the season closes. This year has certainly been challenging for many of us, including ports and ship operators, but we’re optimistic we’ll continue seeing improvements as we enter these final weeks.”

Through October, shipments through the Port of Toledo held steady but lag slightly behind 2019 totals. The Port has handled over 7.25 million tons of cargo year-to-date with nearly 400 vessels loaded or discharged in Toledo.

“So far in 2020, the negative impact of decreased coal and dry bulk shipments have been offset by increases in aluminum, grain and iron ore,” said Joseph Cappel, VP of Business Development for the Toledo-Lucas County Port Authority. “We are about 3% behind 2019 totals and we’re hopeful robust export programs for soybeans and corn will help us catch up to, and possibly surpass, 2019 totals by the end of the year. That would be quite an accomplishment given the negative impacts COVID has had on the global economy.”

Port Milwaukee has maintained a consistent level of commercial performance throughout the COVID-19 pandemic. “Total cargo handled at the Port is up 2% through October, led by exports of grain and other agricultural commodities,” said Port Director Adam Tindall-Schlicht. “By mid-November, Port Milwaukee is expected to have handled over 2 million tons of cargo and have hosted over 300 vessel transits in 2020; both important measures of activity. Diverse commodity shipments, including salt, cement and steel, will keep Port Milwaukee busy during the final weeks of the year.”

The Port of Green Bay has felt the impact of the ongoing pandemic and slow economy. In October, 110,668 tons of cargo moved into and out of the Port, the lowest monthly total for the 2020 shipping season. While the Port no longer expects to hit its goal of 2 million tons this year (1.4 million tons through October) Port Director Dean Haen is optimistic they’ll be close to the figure.

“With a couple of strong months to close out the shipping season, we are still hoping to get close to the 2 million-ton mark,” said Haen. “While shipping through the Port got off to a great start, building on last year’s impressive total, the overall shipping season has been disappointing, but not unexpected given everything that has happened this year. Boosts in salt, coal and petroleum products are certainly not out of the question at this point in the year.”

In early November, the Port of Cleveland received the first shipment of Mass Timber for the INTRO construction project via the Port’s vessel partner the Spliethoff Group. Mass Timber, manufactured in Austria, is solid, engineered wood, such as cross-laminated timber and glue-laminated timber, primarily used for loadbearing structures. The material is new to construction projects in Cleveland, the state of Ohio and most of the United States, and once the INTRO project is complete in early 2022, it will be the tallest Mass Timber building in the country.