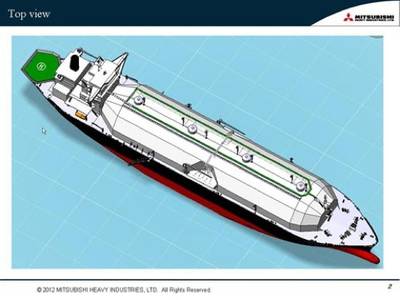 The Sayaendo Series has a hull shape that evolved from LNG carriers with Moss-type hemispherical tanks, (and it offers significant improvements in fuel consumption and maintainability. The unit now being built is slated for delivery in the fiscal year 2014 (ending March 31, 2015).

To protect its four Moss spherical tanks, the Sayaendo (Japanese for 'pea-pod') features a peapod-shaped continuous cover integrated with the ship's hull in lieu of a conventional hemispherical cover. This innovative configuration enables reductions in size and weight while maintaining the ship's overall structural rigidity. The continuous cover over the tanks also improves aerodynamics by substantially reducing wind pressure, which serves as drag on ship propulsion.

The LNG carrier will measure 288.0m (meters) in length overall (LOA), 48.94m in width, and 11.55m in draft. The 138,000 gross tonnage (75,000 deadweight tonnage) ship is capable of carrying up to 153,000m3 of LNG (cargo tank total volume: 155,000m3). It will be jointly owned by Osaka Gas International Transport Inc. (OGIT), a wholly owned subsidiary of Osaka Gas handling the operation of LNG carriers, and MOL, which will function as the ship management company.

With a conventional cover configuration, pipes, wires and catwalks atop the tanks are supported by complex structures. By covering the tanks with an integrated cover and making those supporting structures unnecessary, the new design also improves maintainability.