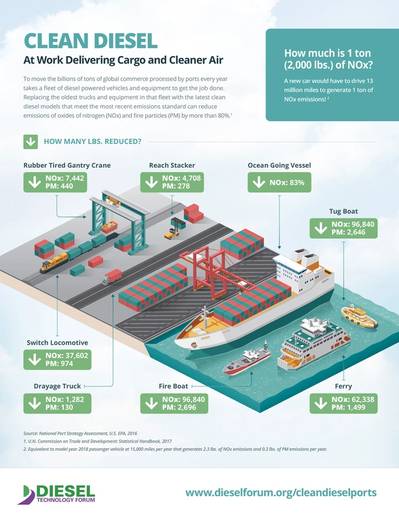 California’s largest ports, the Ports of Los Angeles and Long Beach (LA/LB), are busier than ever AND achieving ambitious clean air goals, largely thanks to the newest generation of diesel technologies. According to the “State of the Ports” addresses delivered last week by the executive directors of the Ports of LA/LB, 9.5 million twenty-foot container units through the Port of Los Angeles and 8.1 million shipping containers through the Port of Long Beach in 2018. Both totals mark the ports’ highest-ever shipping volumes. At the same time, both ports have already achieved their 2023 Clean Air Action Plan milestones for sulfur oxide emissions, nitrogen oxide emissions and diesel particulate matter.

“Clean diesel technologies are an important partner in California’s remarkable clean air and cargo achievements at the Ports of LA and Long Beach,” said Allen Schaeffer, executive director of the Diesel Technology Forum. “Over the past five years, California’s port and maritime industries have rightly prioritized equipment and engine upgrades to the newest, cleanest generation of diesel technologies.”

“Moving trade through California’s ports requires a diverse array of trucks, trains, ships, cargo handling equipment, barges and marine workboats, many of which are powered exclusively by heavy duty diesel engines,” continued Schaeffer. “It’s important that we do so in the most economic, environmentally friendly way possible. By using new-technology diesel engines and ultra-low-sulfur diesel fuel, port administrators and equipment operators have proven that handling more cargo without sacrificing performance and reliability is possible along with achieving important and significant emission reductions for the communities near our nation’s ports.”

“The Ports of LA and Long Beach offer stunning examples of the incredible impact new-technology diesel engines can have for port communities,” said Schaeffer. “The LA/LB Port Authority estimates that between 2005 and 2015, PM emissions fell by 85 percent (745 tons) per year, while NOx emissions fell by 51 percent (8,325 tons) per year. The overwhelming majority of these clean air achievements are attributable to the introduction of the new generation of clean diesel technology in Southern California. Other ports have also reported similarly impressive emission reductions."

There are significant and continuing opportunities to modernize and upgrade engines, machines and equipment used in cargo handling operations. While the latest clean diesel technologies are ready and available to reduce emissions, the U.S. Environmental Protection Agency estimates that by 2020, only 5 percent of America’s switch locomotives and 3 percent of America’s marine workboats will be the newest generation of near-zero emissions technology.

Switching vehicles from fossil-diesel to bio-based fuels like renewable diesel fuel – a low-carbon drop-in alternative to conventional diesel – could offer even further emission reductions to California’s ports. Renewable diesel cuts greenhouse gas emissions by more than 80 percent (compared to fossil-based diesel) and reduces emissions (soot), and does so without requiring any engine or vehicle conversions or the buildout of expensive new infrastructure. A growing number of cities in California including San Francisco, the City of Oakland, the County of Sacramento and others have successfully switched all or a portion of their fleets to utilize this fuel.