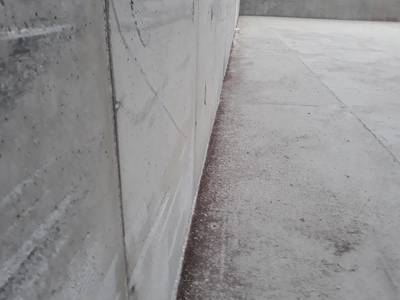 Dead weevils along a wall of a bulk terminal warehouse (Photo: ABTO)

The fumigation of grain cargoes using certain pesticides, namely plant protection products, may not be effective in controlling insect larvae, resulting in cargo damage or loss.

Javier Quintero Saavedra, head of HSE at Terminales Marítimos de Galicia (TMGA), an operator of bulk terminals in Galicia, Spain, and Chairman, Dry Bulk Cargoes Working Group, ICHCA,  said: “We are finding that the pupae and larvae inside maize kernels in various consignments, and which were subjected to in-transit fumigation, are not affected by phosphine or phosphine generating fumigants and growing into weevils while cargoes are in storage.”

Weevils remaining in the port warehouse after the lot has been transported to its ongoing destination is a real issue for terminal operators, particularly if they have only been accustomed to handling grain, meal or feedstocks that are not prone to such infestations.

Saavedra, who will present a case study relating to the pest control challenges facing terminal operators at the Association of Bulk Terminal Operator’s (ABTO) annual conference this October, explained that while consignees had arranged for cargo fumigation both in transit and during storage upon discharge, “insects plagued our silos”, resulting in the extensive cleaning; space treatment with contact insecticide (silos in empty condition) and restoration of silo walls to prevent further infestation.

“Bulk terminals need to implement a fully integrated pest management plan. Operators must monitor silo temperatures and moisture and be able to spot insect and larvae infestations in large storage premises. They should also carry out regular cleaning of empty stores and better understand the use of different pesticides and their effects.”

ABTO CE Simon Gutteridge said: “While grain cargoes are usually fumigated at origin or in-transit if larvae survive and evolve it can be a real issue for terminal operators. It can write-off the whole consignment. There is obviously a strong case for fumigating cargoes stored in silos at discharge ports, especially where maize kernels are stored, but this is not without its own problems.”

The fumigant typically used is phosphine or a phosphine generating product, which is a well-documented health and safety risk in the seaborne transportation of grain. Exposure to this gas has resulted in acute intoxication, hypoxia, asphyxiation and seafarer fatalities; and the risk in shore storage premises is that the fumigant leaks to adjacent ones.
Methyl bromide, another pesticide widely used in the containerized transportation of grain, has also been attributed to intoxication-induced fatalities. It is however banned in a number of countries as it is a well-known ozone depleting substance.

“There are IMO guidelines for the use of pesticides in-transit, but the rules governing their use in storage facilities ashore is at national level. Although the European Commission oversees the approval of active substances, it is the individual state that decides whether to allow their use or not,” said Saavedra. “What the bulk terminals industry needs is more globally-focused best practice guidelines, an initiative supported both by ICHCA and ABTO.”

Javier Quintero Saavedra will present his case study on the pros and cons of port-side fumigation at Bulk Terminals 2019, which takes place on October 8th and 9th, 2019, in Amsterdam, The Netherlands.