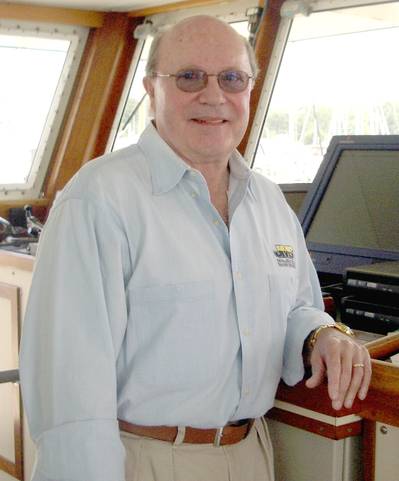 The Fort Schuyler Maritime Alumni Association is proud to announce it will honor John M. Ringelberg PE as Distinguished Alumnus of the year at its bi-annual Awards Dinner on Thursday, Janaury 26, 2012 at Bridgewaters in NYC.  www.fsmaa.org/awardsdinner

Captain Jack Ringelberg is currently CEO of JMS Naval Architects & Salvage Engineers, Mystic CT, which is the parent company of Divers Institute of Technology (DIT), a commercial diving school in Seattle, Washington. He is also President and CEO of the Ocean Technology Foundation a non-profit undersea research and exploration organization, which has been the lead agency in the "Bonhomme Richard Expeditions". This was John Paul Jones flagship that was lost in battle during the Revolutionary War.

After graduating from New York Maritime he spent 16 years in the Navy as a Surface Warfare and Engineering Duty Officer specializing in Salvage and Deep Diving. Notable assignments included worldwide salvage operations including Vietnam, Commanding Officer of the Navy Experimental Diving Unit and Chief Engineer of the Aircraft Carrier John F. Kennedy. While at the Navy Experimental Diving Unit he completed the construction and start up of the Ocean Simulation Facility which is still the worlds most advanced hyperbaric research complex, capable of supporting manned diving and research submarine operations to 2,250 feet.  With this capability he achieved manned diving operations to 1800 feet, which still stands as the Navy record.

Transferring to the Naval Reserve in 1977 he commanded a number of ship repair and engineering units. His last assignment being the Deputy Supervisor of Salvage for the US Navy, with additional responsibility for all Naval Reserve Diving Programs with over 500 divers from the SEAL, Explosive Ordinance Disposal (EOD) and Deep Sea Diving units. With the untimely death of the Supervisor of Salvage he stepped into the breach and coordinated salvage operations during the first Gulf War. He retired from the Naval Reserve with the rank of Captain.

After leaving active duty he joined Seaward Marine where he was Vice President and Chief Engineer and pioneered the use of underwater hull cleaning and non destructive testing for the United States Navy. He later joined International Paper as Corporate Director of Power and Energy and played a leadership role in restructuring the design, operation, construction and maintenance of the companies major paper mill power plants; gas, oil, and coal properties; as well as building ten gas turbine cogeneration and five wood gasification projects.

While at International Paper he served as Chairman of JMS and in 1998 became its full time President and CEO.

He holds a master's degree in naval architecture from Webb Institute, is a registered professional engineer, a member of a number of professional and fraternal societies and is a Fellow and the past Regional Vice President of SNAME. He was part of the SNAME delegation that recently traveled to China.  Noteworthy among his civic activities he has been: President and Founder of the Institute of Diving and Man in the Sea Museum, President of the Mobile Ballet, Chairman of the Mobile, Alabama YMCA, National Vice President of the Naval Reserve Association.

He is married to the former Karen Wynn Nelson of Panama City Florida and has four sons. Two are graduates of the US Air Force Academy and are currently serving in the Defense Department, one as a test pilot and the other as an intelligence analyst.