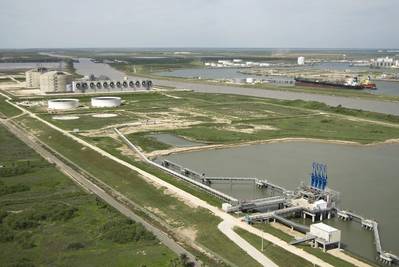 Freeport LNG, a privately held U.S. liquefied natural gas company, said on Thursday it pushed back the projected start date for its $13 billion export terminal under construction in Texas by about nine months to around Sept. 1, 2019.

Freeport LNG now expects the first liquefaction train to enter service around Sept. 1, 2019, with the second and third trains seen in service around Jan. 1 and May 1, 2020, respectively, said Zdenek Gerych, a spokesman at Freeport.

Previously, the three trains under construction had been expected to enter service between the fourth quarter of 2018 and the final quarter of 2019.

Each train will have the capacity to liquefy about 0.7 billion cubic feet (bcf) per day of gas. One bcf is enough gas to supply about five million U.S. homes for a day.

The reasons for the delay were undetermined at this point and under investigation, Gerych said.

S&P Global Platts said the delay stemmed from flooding of some yards where equipment was stored during Hurricane Harvey, which triggered massive flooding in the Houston area in August 2017.

Freeport is building its facility on Quintana Island, about 67 miles (108 kilometers) south of Houston on the Gulf Coast.

In addition, Freeport was still developing Train 4 at the facility, which could enter service in 2023 or 2024 if the company's marketing efforts go well, Gerych said.