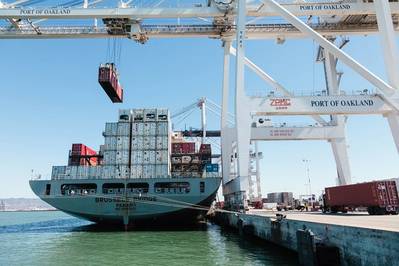 The Rating Outlook on all of the bonds is Stable.

Key Rating Drivers
The ratings reflect diverse revenues from the port's aviation, maritime, and Commercial Real Estate (CRE) operations. The ratings are further supported by Oakland International Airport's (the airport) largely origin & destination (O&D) traffic base, flexible rate-making methodology and status as a medium-to-large hub in a competitive market space, coupled with long-term seaport contracts which provide stability for the port's financial position. The port's financial metrics are strong in terms of leverage and coverage, while the upcoming capital improvement plan (CIP) is manageable with no additional borrowings required for funding. Financial metrics are strong with Fitch Rating Case average total debt service coverage (DSC) of 1.5x and total leverage declining to 1.5x by 2023.

Traffic Exposed to Competition - Revenue Risk (Volume): Midrange
The port benefits from its sizeable enplanement base of 6.7 million and maritime cargo operations within the large, economically diverse and wealthy San Francisco Bay Area. These strengths are somewhat offset by high dependence on the Pacific Rim for maritime trade, significant competition from nearby airports, and the airport's high 69% concentration in Southwest Airlines. Concentration concerns are mitigated by the airport's primarily origin and destination (O&D) traffic profile with robust positive growth rates in recent years.

Modest Capital Plan - Infrastructure Development and Renewal: Stronger
The port released an updated five-year CIP of approximately $499 million, which Fitch views as manageable. About 86% of the CIP is expected to be paid with internally generated cash and grants, with the remainder funded by PFCs and CFCs. Current port facilities have capacity to accommodate a moderate degree of further growth.

Conservative Debt Structure - Debt Structure: Stronger (senior); Midrange (intermediate & underlying bank bond notes)
Both senior- and intermediate-lien port revenue bonds are fixed rate, fully amortizing with no refinancing risk. All of the senior lien debt is supported by a cash-funded debt service reserve fund, while all of the intermediate debt is supported by a reserve fund that is funded by a surety. The CP debt is subordinate to the senior and intermediate liens, but the small debt service requirement results in a DSC that is not materially different from coverage for the intermediate lien.

Peer Group
The port's credit profile is weaker than its consolidated peers such as Massport (AA/ Stable) and the Port of Seattle (AA/AA-/AA-/Stable). Massport's higher rating reflects its superior franchise strength as a very large international gateway. The Port of Seattle's higher rating reflects its much larger size and its strong competitive position within the Pacific Northwest but has higher all-in leverage.

Rating Sensitivities
Future Developments That May, Individually or Collectively, Lead to Negative Rating Action:
--Significant increases in the port's cost profile or a notable and sustained decline in ongoing maritime and/or aviation sector revenues leading to leverage exceeding 6x and all-in DSCR trending below 1.4x on a consistent basis.

Future Developments That May, Individually or Collectively, Lead to Positive Rating Action:
--Fitch views near-term positive rating migration as unlikely due to the competitive nature of the enterprise and the expectation that financial metrics will not materially improve from current levels.

Credit Update
The port consists of three business divisions: aviation, maritime and CRE. The aviation and maritime divisions generate the vast majority of revenues and their contributions to overall port revenues have been about evenly split on a historical basis. This revenue diversification benefits the port as historical losses in one division have often been offset or mitigated by gains in the other divisions. As a result, the port's largest cumulative peak-to-trough operating revenue decline over the past 12 years was a relatively mild 5.5% loss in 2009.

Performance Update
The aviation division has performed strongly over the past few years. Enplanements grew 6.0% in fiscal 2018, following growth of 8.3% and 8.2% in fiscal years 2017 and 2016 respectively. Enplanements are up 3.5% fiscal year-to-date through December. International traffic from Oakland International Airport has been a growth driver, and air traffic at all three major airports serving the Bay Area has increased at rates well above national indices which is a recognition of the market strength in the region. Management projects continued growth moving forward, albeit at a more subdued and sustainable pace in the low single digits. CPE grew to $12.25 in fiscal 2018 from $11.28 the year prior, consistent with levels seen over the past five years and comparing favorably with other Bay Area airport CPEs. Fitch views management's enplanement projections as reasonable given the region's strong economic underpinnings that should continue driving population and employment growth into the foreseeable future.

The airline rate-making methodology is on a cost-center basis and the build-up of rates is residual on the airfield and compensatory on the terminal beginning in fiscal 2018. The switch to a compensatory rate build-up from residual provides airlines with more cost certainty but could expose the airport to potential reductions in passenger traffic. This risk is mitigated by the airport's use of MAGs with its concessionaires, the legal flexibility of the rate-by-ordinance framework, and because the switch-over to compensatory rate-setting only affects 25% of airport revenues and an even smaller share of consolidated port revenues.

The seaport has grown slowly over the past several years, though in FY2017 total 20-foot equivalent units (TEUs) surpassed the previous peak of 2.4 million achieved in 2006. TEUs grew an additional 2.0% in fiscal 2018. The seaport has faced transitory set-backs over the past two years, including labor unrest at the start of 2015 that affected ports across the West Coast and the loss of a major tenant, Outer Harbor Terminal LLC (OHT), in early 2016. The seaport's total TEU volume increased 2.0% in fiscal 2018, and fiscal-year-to-date 2018 is out-performing the previous year by 7.9%.

The port's consolidated financials performed better in fiscal 2018 than the previous year. Operating revenues increased 6.2%. Net operating income increased by 3.3% to $175.5 million, adjusting senior and intermediate DSC to 4.0x and 1.8x from 3.9x and 1.7x the year prior, respectively. Liquidity is strong, with $368.2 million of unrestricted cash, equivalent to 654 days cash on hand, with moderate total leverage of 3.2x in FY 2018. This level of liquidity likely will be spent down to some extent on the port's capital program.