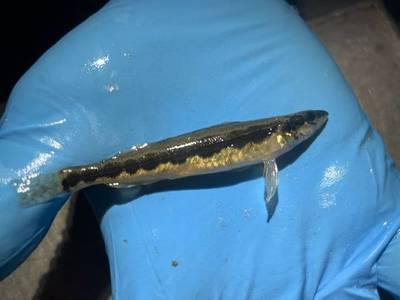 Field staff from Ohio’s Department of Natural Resources (ODNR) were very surprised when they caught a Longhead Darter fish below the New Cumberland Dam on the Ohio River 54 miles downstream from Pittsburgh. The Darter hasn’t been spotted in the Ohio River since the 1930s, according to John Navarro, Aquatic Stewardship Program Administrator with ODNR’s Division of Wildlife.

ODNR staffers Tweeted: “Why are we so excited? This striking creature, native to Ohio, was thought to be extirpated from the state… that is until fish management crews captured two this fall during Ohio River routine bass surveys.” The significance goes beyond one fish species in one river. Navarro believes that in past decades small numbers of Darters were able to survive in cleaner, distant portions of Ohio River tributaries, escaping the main stem, during decades when the Ohio River was characterized as “an industrial river,” heavily impacted by municipal and industrial wastes. Navarro thinks that portions of the Allegheny River, a source for the Ohio, was able to remain favorable for the Darter.

Now, fifty years after passage of the Clean Water Act (CWA), the Darter is seen as a remarkable indicator of the extensive recovery within American waterways, largely due to CWA directives and policies. The Darter sightings indicate that not only is the Darter population increasing but that a larger population can expand into new territory, including the Ohio River, because of marked water quality improvements. The Darter, of course, impacts a larger ecosystem. It is an important part of the food chain. It eats insects. It is food for larger game fish – bass and walleye. It serves to disperse freshwater mussels, immobile creatures which need a host to carry offspring to different locations. Good news already in 2022.